How Humans Landed In The Americas Might Not Be So Simple 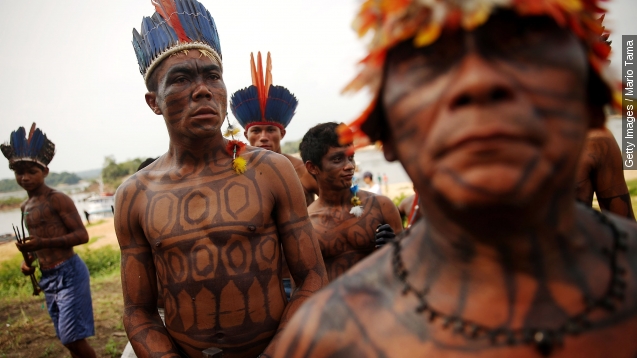 SMS
How Humans Landed In The Americas Might Not Be So Simple
By Ryan Biek
By Ryan Biek
July 22, 2015
New genetic research links tribes from the Amazon to natives of Australia and New Guinea.
SHOW TRANSCRIPT

New research from Harvard is putting a wrench in the prevailing theory about where native North and South Americans came from.

For years, many researchers believed a single large wave migrated through Eurasia and modern day Alaska to populate the Americas roughly 15,000 years ago.

This study, published in the journal Nature, suggests there could have been two migratory waves that populated the Americas.

The findings go against two recently discovered genetic links to modern Native Americans. One was found in the DNA of 11,000-year-old feces in Oregon, and another in a 12,000-year-old skeleton found in a Mexican underwater cave.

But it's in line with 2003 findings that ancient Brazilian and Colombian skulls resembled those of Australians more than other Native Americans.

The Harvard lab said genetic analysis of Amazonian tribes had been relatively sparse until now. It compared the genomes of 30 Native American groups to each other and 197 other populations from around the globe.

The vast comparisons showed three Amazonian tribes still had more in common genetically with native people from Australia and New Guinea than any group native to Siberia.

The study does have its critics, like geneticist Dr. Cecil Lewis Jr. of the University of Oklahoma, who argues Amazonian populations have low genetic diversity, which, "raises very serious questions about the role of chance … in creating this Australasian affinity."

However, there's never been genetic evidence linking Native Americans to groups beyond Eurasia, and at the very least, this research is making scientists wonder if the ancestry of the Americas is more complicated than previously imagined.