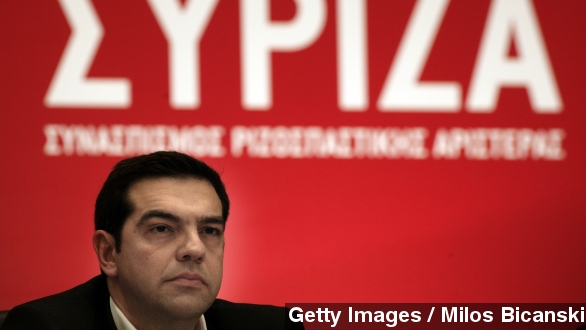 Alexis Tsipras and his far-left Syriza party are poised to win Greece's snap election Sunday with around one-third of the vote, which would signal a radical shift for the country's politics.

It's a historic step for the party, and an impressive rise, since Syriza was polling at just under 5 percent six years ago. What changed?

Think back to 2010. To avoid a catastrophic default, then-Prime Minister George Papandreou accepted a 110 billion euro bailout from other EU members on the condition Greece underwent harsh austerity measures.

Like most things in contemporary Greek politics, Syriza's rise has its roots in the economic crisis of 2009. The global economic downturn left Greece with a massive debt and a crushing six-year recession.

Austerity turned out to be political suicide for Papandreou and his center-left party, the Panhellenic Socialist Movement, which ceded control to their longtime center-right rivals, New Democracy, in 2012.

New Democracy and its leader, Antonis Samaras, managed to secure even more financial aid for Greece thanks to a restructuring of private debts and a fresh 130 billion euro bailout package.

What New Democracy hasn't done is given Greece relief from austerity. As a result, the party has been slowly hemorrhaging approval.

That was evident when his coalition government failed to select a president in December, triggering these snap elections.

With the erosion of Greece's two main popular parties, voters have turned to political outsiders. And that's where Syriza comes in.

One Syriza supporter told Al Jazeera: "There is a generation here waiting and waiting for an opportunity to be given. You can’t live like that."

The far-left party has successfully courted the disaffected Greek votes, thanks in no small part to Tsipras' charismatic message of radical change. Syriza's now moved from the far-left fringe to the mainstream.

Syriza's made a number of populist promises ahead of the election. Chief among them: confronting the EU about Greece's debt.

The Syriza party has walked back a lot talk about leaving the euro, but Greece is still on a direct collision course with the troika of lenders who control the debt.

It's a delicate balance for Syriza: Too much confrontation with the EU risks a default and possibly an exit from the EU entirely.

On the other hand, austerity has already hollowed out two political parties in Greece. If Syriza doesn't deliver on promised reforms, it could be next.

As Tsipras told the Guardian in 2013, "If we gain power and do not try to change everything, then we have no chance of remaining in power."