How Gluing Pedestrians To Cars Could (Sort Of) Make Them Safer 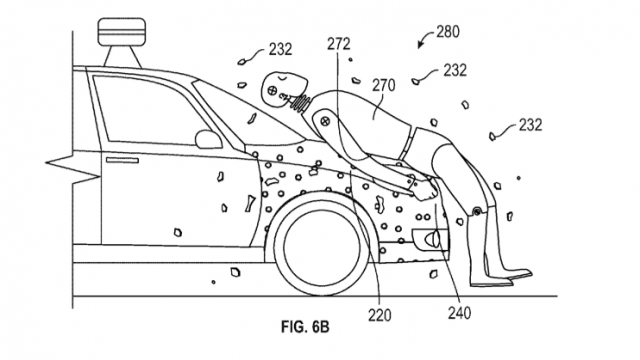 SMS
How Gluing Pedestrians To Cars Could (Sort Of) Make Them Safer
By Ben Lawson
By Ben Lawson
May 20, 2016
Google's human flypaper patent gets an "A" for effort, but would it actually keep people safe?
SHOW TRANSCRIPT

Is human flypaper the next innovation in automotive safety? Google apparently thinks so.

The company filed a patent meant to protect pedestrians in the event they're hit by a car — more specifically, an autonomous car. The person would be stuck to an adhesive on the hood of the car on impact, which would prevent them from bouncing off the car and sustaining even more injuries.

The patent describes an "eggshell-like" coating on the hood. When hit, it would then crack and reveal the adhesive.

Of course, this creates its own set of risks. For instance, being stuck on a car that then barrels into another vehicle or a wall is probably not any safer than being thrown from the first car.

But Bryant Smith, an autonomous car expert with the Stanford School of Law, praised Google for thinking of the safety of people outside the car.

"Manufacturers have gotten remarkably good at protecting the occupants of the vehicle, but there's been much less attention to protecting the people outside," Smith said.

Google is far from the only company thinking about pedestrian safety. Volvo, for instance, has air bags that deploy outside the car, over the windshield, to protect a person's head from striking the glass.

Google also says in the human flypaper patent that autonomous cars will eventually be able to avoid all accidents. Hopefully that happens before we resort to gluing people to cars.