How Fruit Flies From Space Could Help Us Reach Mars 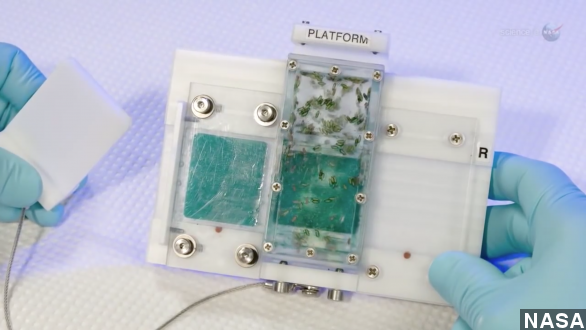 The International Space Station Expedition 41 crew is back on Earth, and they've brought some aliens with them ...

LAUREN PRZYBYL, KDFW: "The crew of one astronaut, a German flight engineer and a Russian cosmonaut were not alone in the capsule — they brought back space-born fruit flies! It's all part of an experiment."

But before the science fiction plotlines start going, they're regular fruit flies; they just happen to be born in space. They were all frozen when they died, too, so they're not about to escape and breed with Earth-born fruit flies to create some kind of hybrid mutant fruit fly. The experiment was pretty cool, though.

Members of the 41st expedition to the ISS took the flies with them in a number of cassette-sized cartridges when they boarded the station in September. The flies lived, reproduced and died on the station during the expedition, and some were frozen for their return trip. As for why? (Video via NASA)

NASA: "They will orbit earth alongside astronauts, helping us explore the effects of long-term spaceflight on human beings. ... The fruit fly lab will allow us to look into a variety of questions, such as the effect of spaceflight on aging, cardiovascular fitness, sleep, stress and much more."

Knowing more about the effects of long-term spaceflight will be crucial in future missions to Mars, which is usually more than 100 million miles from Earth. NASA wants to get there by 2030.

For perspective, it has taken all of the Mars landers so far more than 250 days to bridge that distance one way, so add in the return journey and it would take at least 500 days — a cool year and a third. (Video via NASA)

Nevertheless, the health risks are well-documented. Humans aren't meant to be in space, especially not the microgravity of space.

Astronauts have to stick to rigorous exercise routines because they don't have to expend the same energy we do to counteract gravity. But even with that exercise, a NASA study from earlier this year found that "even when crew members did aerobic exercise five hours a week and resistance exercise three to six days per week, muscle volume and peak power both still decrease significantly."

TRACE DOMINGUEZ, DISCOVERY CHANNEL: "And it's not just muscles and bones. ... Astronauts' immune systems get a little freaky too. Some immune cells overdo it, while others underdo it, causing increased allergies and allowing viruses that would remain dormant on Earth to get an asymptomatic foothold."