How Fox's 'Empire' Created An Empire Of Its Own 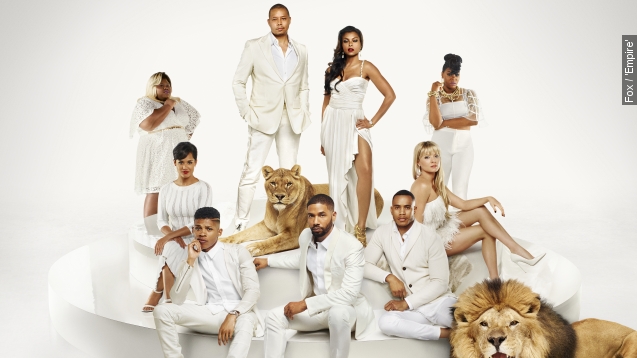 Get ready for Wednesday night because Boo Boo Kitty is back.

"Are we gonna have some problems?" Taraji P. Henson's character said on the show.

Fox's "Empire" was a major success story last year, and there was outrage when it was basically snubbed at the Emmys (except Taraji P. Henson's nomination because — hello — she's amazing.)

But there's a story within that success story, and that's why the show blew up in popularity.

The increasing ratings over the first five episodes of season one last year broke a record that's at least 23 years old. The last time we saw that type of steady increase was in 1992. (Video via Fox / "Empire")

A lot of that has to do with the way co-creator Lee Daniels designed the show. Yes, it's a predominantly African-American cast. But the overall theme of "Empire" is about Lucious Lyon living the American dream — which is something everyone can relate to, regardless of race. (Video via Fox / "Empire")

Aside from Terrence Howard and Taraji P. Henson being the two A-list celebs at the helm of the show, the guest appearances list has been equally as impressive. Mary J. Blige, Courtney Love, Jennifer Hudson and Naomi Campbell all appeared in the first season.

And dare I say the line-up gets more impressive in the second season. Oprah Winfrey, Chris Rock, Alicia Keys, Lenny Kravitz and Mariah Carey are all slated to guest star.

These huge names bring the show massive fanbases who want to watch their favorite performer get down and dirty with the "Empire" cast.

The writing is also strong — specifically for Henson's character, Cookie Lyon. Her strong personality and unique words have been dubbed "Cookie-isms" by fans of the show. (Video via Fox / "Empire")

Those "Cookie-isms" are a result of Fox and the executive producers ignoring the white gaze, which is the idea of viewing the world through a white person's eyes. One "Empire" writer told NPR Cookie is free because the show plays "inside baseball with black culture." (Video via Fox / Empire)

"I started selling drugs when I was 9 years old. I did it to feed myself. But it was music that played through my mind and kept me alive when I thought I was going to get shot," Lucious Lyon said on the show.

People love tuning in to watch Cookie's larger-than-life personality every week, and fans' reactions to her interactions with other characters helps propel the "Empire" social media explosion that happens weekly. (Video via Fox / "Empire")

In turn, social media generates interest for people who have some major FOMO (fear of missing out), which continues to boost the ratings.

Not to mention the insane job the "Empire" marketing team has done to continue convos on social media year-round. From Jimmy Fallon skits and "Saturday Night Live" appearances to Jussie Smollett performing "Empire" hit songs at award shows, it's easy to see that the show is here to stay.