How Four Years Of Drought Has Left California Out To Dry 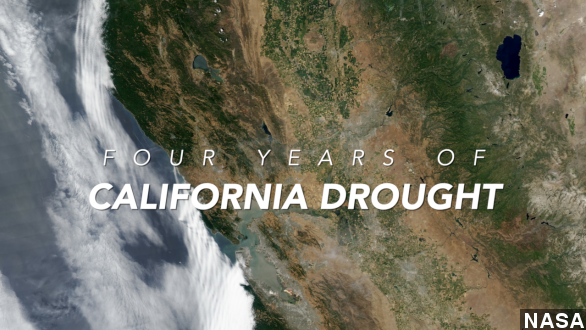 SMS
How Four Years Of Drought Has Left California Out To Dry
By Evan Thomas
By Evan Thomas
March 22, 2015
One of the worst droughts on record has had far-reaching consequences throughout the state.
SHOW TRANSCRIPT

By 2014, the California drought had sucked so much greenery out of the landscape it was visible from space.

The drought is now in its fourth year and triggering new cutbacks as residents try to save more water.

California Gov. Jerry Brown just proposed a $1 billion drought-relief package: It provides funding for emergency drinking water in the hardest-hit areas of the state and for groundwater management. (Video via XETV)

This month California also introduced new mandatory practices to cut down on water use. Residents can't water the lawn for two days following precipitation, for example, and restaurants can't serve water unless a customer asks for it.

In the meantime, the whole state is feeling the heat. California's crops are one of the largest drains on the state's water. Irrigation accounts for 41 percent of freshwater use.

Last year, the government had to regulate groundwater drilling for the first time. Farmers are pumping enough water out of the aquifer in the San Joaquin Valley it's causing the ground to sink. (Video via National Geographic)

Snowpack is down to 12 percent of the average, diminishing the capacity of hydroelectric power systems, which, in normal years, supply 15 percent of the state's electricity. (Video via the National Science Foundation)

A report by the nonprofit Pacific Institute found during the drought, California residents shelled out $1.4 billion more than average for electricity since hydroelectric power is so diminished.

The report notes this is a one-two punch. Shifting from hydro to natural gas or coal power also increases emissions. (Video via The Pacific Gas & Electric Company)

And infrastructure improvements that would generally help cut down on carbon loads are falling out of public favor.

This year, California broke ground on a $68 billion high-speed rail system. As the Los Angeles Times points out, it's money some residents would rather see spent on combating the more immediate problem of there being no water. (Video via KBCW)

In San Diego County, for example, California has turned to the ocean to help.

It could come just in time. Data from the National Oceanic and Atmospheric Administration suggests drought conditions in California and elsewhere will get worse as North America leaves the wet season behind.

This video includes images from Getty Images, the State of California and NASA. Music by Skill Borrower / CC BY NC Sampling Plus 1.0.