How Fantasy Sports Cashed In On Our Impatience 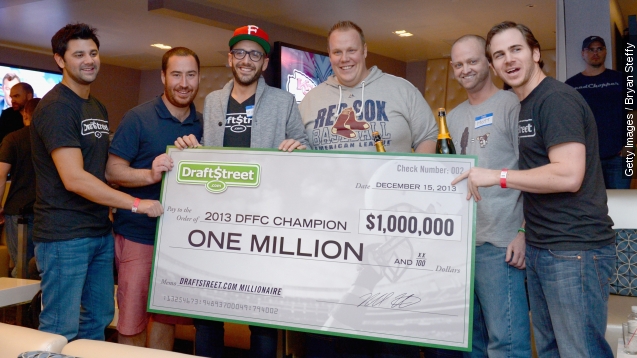 SMS
How Fantasy Sports Cashed In On Our Impatience
By Cliff Judy
By Cliff Judy
August 22, 2015
Fantasy sports players are spending more than 50 times the money on daily fantasy games now than just three years ago.
SHOW TRANSCRIPT

Remember the days when a fantasy football draft was offline, annual, typically held in someone's garage?

The only real money exchanging hands was the $20 your friends hopefully remembered?

"It's an IOU. It's just as good as money," a friend answered.

"Dog, I still have yours from last year," the commissioner said.

"It's still good, too!" the friend said.

My how things have changed in fantasy sports.

I'm sorry, what was that? Six and even seven figures in prize money?

The biggest reason fantasy sports now look so different from even a few years ago — we don't want to wait the whole season anymore to crown a winner.

Consider the numbers from the Fantasy Sports Trade Association — yes, it's a real thing. This year, an estimated 56.8 million people will play fantasy sports — impressive growth from just three years ago. Those players will spend an average of $162 for the year on traditional, season-long fantasy gaming — more than two-and-a-half times the amount from 2012. But daily fantasy sports is where we see skyrocketing growth. Players will spend $257 this year on daily games compared to just $5 three years ago.

That surge has plenty trying to make a money grab, but it's led most prominently by two companies — FanDuel and DraftKings. They facilitate those daily games and take a cut of the entry fees. (Video via DraftKings)

And those services have reached a whole new level of clout now that sports leagues are comfortable knowing fantasy gaming isn't considered gambling.

FanDuel has signed sponsorship deals with more than half the teams in the NFL, and the NBA has an ownership stake in the company. Major League Baseball did the same with DraftKings, which also has deals with some NFL teams and the NHL.

So draft wisely this year, everyone. And then do it again tomorrow. And the next day. If you can afford it, of course.