How Exclusive Streaming Deals Make It Tough On Consumers 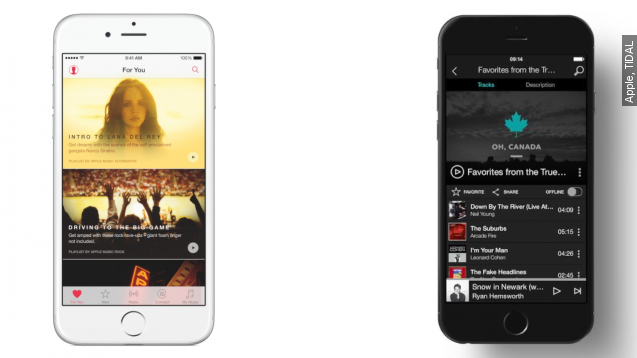 SMS
How Exclusive Streaming Deals Make It Tough On Consumers
By Eugene Daniels
By Eugene Daniels
August 30, 2015
Drake's Katrina benefit show was blocked on Tidal due to an exclusivity deal with Apple, showing how all these contracts are making things confusing.
SHOW TRANSCRIPT

The problem with streaming services getting exclusive rights to an artist is sometimes we — the listeners — end up losing out. (Video via Apple)

This weekend, New Orleans native Lil Wayne threw a benefit concert remembering Hurricane Katrina. He brought out a bunch of big name friends, including the group that started his career, the Hot Boys, and his protege, Drake. (Video via Cash Money Records)

The whole concert streamed exclusively on Tidal ... well, except for Drake's performance. (Video via Tidal)

See, Drake signed an "exclusive" distribution deal with Apple Music. He even announced the rollout of the service at Apple's Developer's Conference. (Video via Cash Money Records)

"Instead of having to post your stuff on these different and sometimes confusing places, it all lives in one very simple, very easy place: and that is Connect," Drake said in his speech.

So Drake's Katrina benefit performance was blacked out. Tidal tweeted, "Apple is interfering with artistry and will not allow this artist to stream. Sorry for Big Brother's inconvenience."

According to the New York Post, Apple threatened to sue Tidal for $20 million if Drake or any of his music streamed during the concert.

But Drake's publicist told BuzzFeed News, the block was all Drake's decision. Tidal says it has emails to prove otherwise. (Video via Cash Money Records)

Whoever made the call, one thing is clear: when two exclusivity deals collide, consumers lose.

Exclusives are used to get more people to sign up for a service, but they also force listeners to have to subscribe to more than one service to stream all the artists they want. (Video via Tidal)

Let's say you love Taylor Swift and Prince, for example. Despite her public spat with Apple, Swift's most recent album 1989 is only available to stream on Apple Music. Prince's new album will be exclusively available on Tidal. To stream both, you'll have to shell out around $20 a month. (Video via Big Machine Records)

But that's no problem for the streaming companies or the record labels. So expect to see more and more of your favorite artists split across services with each new deal.