How Electable Is Ben Carson? 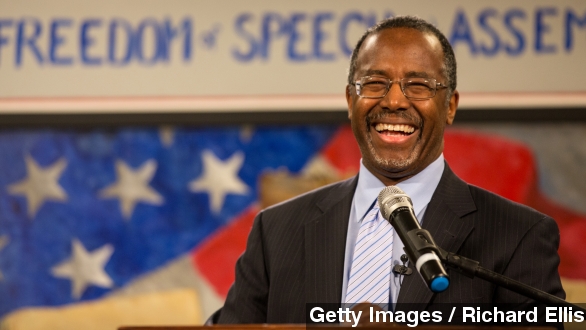 SMS
How Electable Is Ben Carson?
By Kate Grumke
By Kate Grumke
March 17, 2015
Pediatric neurosurgeon Ben Carson is a favorite for 2016 among many conservatives, but he has some things working against him.
SHOW TRANSCRIPT

He’s becoming a favorite among some conservatives and says his experience as a pediatric neurosurgeon qualifies him for the presidency, but how electable is Dr. Ben Carson?

The political newcomer first made waves in conservative circles in 2013 for criticizing Obamacare and proposing a tithe-based flat tax rate at the National Prayer Breakfast — as President Obama looked on right behind him.

“We need doctors, we need scientists, engineers, we need all those people involved in government. Not just lawyers. ... I’m sorry, but I gotta be truthful. What do lawyers learn in law school? To win,” said Carson.

Then in February, Carson was a hit at the Conservative Political Action Conference. The event is seen as an early test for GOP presidential hopefuls, and Carson placed 4th in the event’s Straw Poll, beating many establishment politicians including fundraising frontrunner Jeb Bush.

Dr. Carson’s team announced earlier this month that it had formed an exploratory committee to look into a 2016 presidential bid.

Besides the Straw Poll, Carson has done well by a few other measures.

A Gallup poll this month found that Carson’s favorability rating was the highest for 2016 presidential hopefuls — even higher than Hillary Clinton’s. The downside: that was among people who have heard of him, and not many have. He ranked 14th in familiarity in that poll.

Favorability isn’t the only thing Carson has beat Clinton — and everyone else — at recently. Carson’s book reportedly outsold Clinton’s “Hard Choices” in sales up to the beginning of March by almost 100,000 copies. And the two were leaps and bounds ahead of all the other potential 2016 candidates.

And Carson’s Political Action Committee reportedly had $13 million in donations at the end of 2014, which was more than Clinton’s PAC Ready for Hillary.

Carson is still relatively unknown, and it has been decades since a political outsider won the presidency.

Iowa political blogger Craig Robinson told the Wall Street Journal voters, “want someone who is not soiled by Washington, D.C. But these people make horrible presidential candidates. They don’t realize that every word they speak, every interview they do, is going to be critiqued.”

Carson most recently fell into that trap earlier this month in an interview with CNN.

“You think being gay is a choice?”

“Because a lot of people who go into prison go in straight and when they come out they’re gay,” said Carson.

Carson later apologized for that statement.

Still, 2016 could be anyone's game. So far, more than a dozen candidates have expressed interest in running.