How Effective Are UN Peacekeepers? 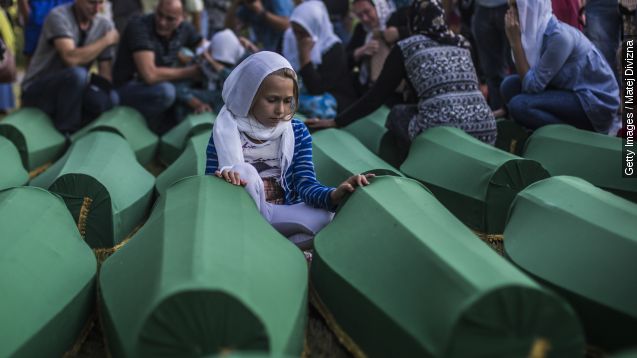 That’s not what happened in Srebrenica. On July 11, 1995, the U.N. peacekeepers deployed to protect the town stood by and watched as Bosnian Serb troops slaughtered as many as 8,000 Muslim men and boys in the worst tragedy Europe had witnessed since the Holocaust. (Video via United Nations)

The U.N. has since apologized for failing to do its job. But 20 years later, are the “blue helmets” any better equipped to prevent another massacre?

A recent internal report suggests otherwise. It found between 2010-2013, peacekeepers responded to just one in five cases where civilians came under attack. (Video via United Nations)

Historically, UN peacekeepers have served more like referees — deployed to a conflict zone to maintain the peace, rather than enforce it. (Video via United Nations)

The organization points to fairly successful operations in Sierra Leone, Liberia and Burundi as proof the strategy can work. But other missions have produced mixed results.

The U.N.’s handling of Somalia in the mid-nineties was described by one U.N. official as "the greatest failure of the U.N. in our lifetime."

The U.N. has also admitted failure in Sudan and Rwanda.

Which is why it took a different approach in the Democratic Republic of the Congo, where a bloody conflict had left millions dead. (Video via United Nations High Commissioner for Refugees)

In 2013, the U.N. Security Council ditched its policy of peacekeepers acting only in self defense, instead launching a what it called a "force intervention brigade" aimed at disarming the rebels. (Video via United Nations)

But the peacekeepers were repeatedly accused of inaction as the rebels continued to terrorize the locals. (Video via Al Jazeera)

Add to that, reports of peacekeepers paying children for sex and selling weapons to militias and it's hard to classify the peacekeeping experiment as anything but a failure.

Today, as tens of thousands of people die in armed conflicts around the globe, the U.N. is under more pressure than ever to act.

But at the U.N. Security Council — inaction. (Video via U.S. Mission to the United Nations)

Russia recently vetoed a resolution that would have labeled the Srebrenica as a genocide.

This video includes images from Getty Images, the United Nations, the Centers for Disease Control & Prevention and music from Chris Zabriskie / CC by 4.0.