How Ebola Can Hide In The Body 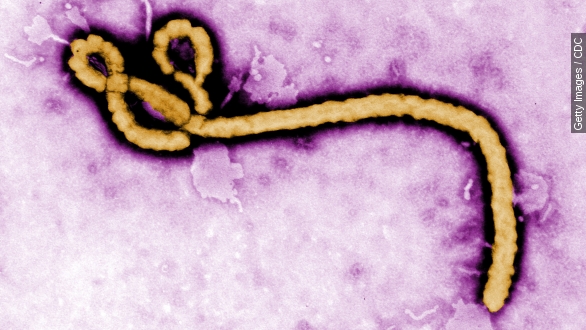 SMS
How Ebola Can Hide In The Body
By Kate Grumke
By Kate Grumke
May 8, 2015
Ebola survivors are finding the virus months later in their eyes and semen because of how the immune system works in certain areas of the body.
SHOW TRANSCRIPT

In the past couple weeks, we have heard two reports of the Ebola virus sticking around for a surprisingly long time in survivors' bodies.

On May 1, the Centers for Disease Control and Prevention issued a warning to male Ebola survivors that they should use a condom during sex indefinitely.

That warning came after a woman contracted Ebola after having unprotected sex with a male Ebola survivor. He had overcome the virus about five months before. (Video via World Health Organization)

And on Thursday the New England Journal of Medicine reported an American doctor who survived the disease had Ebola in his eye more than a month after leaving the hospital — it even turned one of his normally blue eyes green. (Video via World Affairs Council)

Scientists still don't know everything about why Ebola sticks around so long in survivors' semen or eyes, but testicles and eyes have something in common — they're both immune privileged.

Immune privilege means the immune system doesn't respond the same way to antigens in certain areas of the body. It is believed to occur in the eyes, testicles, and during pregnancy in the placenta and fetus.

While this function of the body protects those areas from an inflammatory immune response, which could harm them, it also creates a safe haven for viruses like Ebola.

But for survivors of Ebola, this means they're not completely in the clear yet. And this Ebola outbreak had thousands of survivors — many more than previous outbreaks.

During an Ebola outbreak in 1995, there were similar reports of eye infections. Judging by that outbreak, NPR reports about 15% of survivors could be at risk of vision loss or even blindness this time around as they move on from the disease.

And the CDC still doesn't know exactly how long Ebola can be found in semen. Before this women became infected, it was thought Ebola was gone from semen after three months.

Ebola survivors are also at risk for a type of joint and bone pain that feels similar to arthritis. Immune privilege is believed to occur to some extent in articular cartilage found in joints, although there isn't necessarily a direct connection to what Ebola survivors experience.