How Does France Move Forward After Terror Attacks? 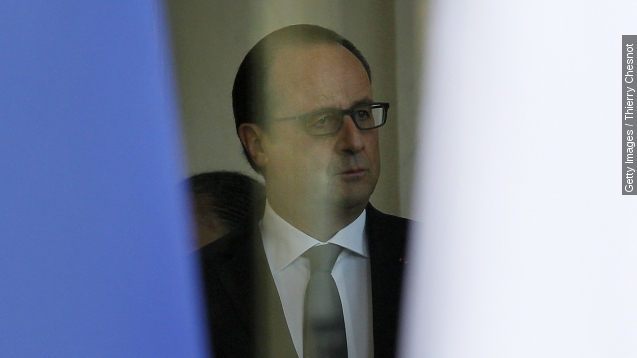 SMS
How Does France Move Forward After Terror Attacks?
By Ben Lawson
By Ben Lawson
November 14, 2015
There's no certain answer for France's next logical step after the deadly series of terrorist attacks in Paris.
SHOW TRANSCRIPT

There is no clear picture for how a series of terrorist attacks in Paris that left at least 120 people dead will affect France's security policy at home and abroad.

ISIS has claimed responsibility for the attacks. The group said they were in response to insults against the Islamic prophet Muhammad and France's military involvement in Syria. (Video via NBC)

France just began its campaign of airstrikes against the group in Syria in September. Shortly after the attacks in Paris, French President Francois Hollande vowed "merciless" retaliation, but it's too early to say what exactly that would mean. (Video via BFMTV)

NATO officials told The Wall Street Journal they don't expect to meet with French authorities about the incident, but that could change as more is discovered about how ISIS carried out the attack.

He said, "We'll see the kind of reaction we saw after Charlie Hebdo, a rallying behind the values that make up French identity, but obviously no impact on foreign policy."

However, the attack on Charlie Hebdo did have some impact on France's domestic policy. Following that incident, France passed controversial legislation that's been compared to the U.S. Patriot Act. France's law now allows authorities to tap phone and email communications without seeking approval from a judge. (Video via BBC)

France also currently has movement at its borders tightly restricted. Many European countries have long allowed for free movement across their borders, but that was already strained due to the refugee crisis.

And border concerns likely won't lessen as France was already openly concerned with the number of French nationals traveling abroad to train with terror groups before these attacks.