How Disney Factors Into The NFL's Plans For Los Angeles 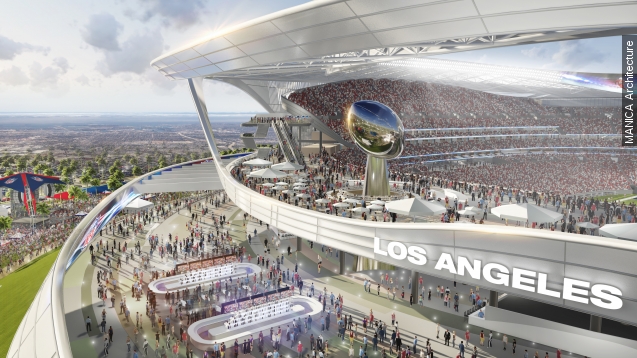 SMS
How Disney Factors Into The NFL's Plans For Los Angeles
By Matt Moreno
By Matt Moreno
November 11, 2015
Disney CEO Bob Iger is spearheading the plan to move the Oakland Raiders or the San Diego Chargers to Carson, California, a Los Angeles suburb.
SHOW TRANSCRIPT

The San Diego Chargers' and Oakland Raiders' plans to move to Los Angeles are getting a big boost.

CBS Sports first reported about Iger's involvement. The outlet says he will be tasked with "all major initiatives with the venture, including stadium design, naming rights and fan experience, and will be responsible for guiding construction and operation of the facility."

Iger's been a top-ranking executive at Disney since the '90s when he was first named president of Walt Disney International in 1999. From there, he's continued to move up the ladder, becoming Disney's CEO in 2005.

As Los Angeles Times points out, "Disney owns ESPN, and Iger has a working relationship with many of the NFL owners as well as Commissioner Roger Goodell."

This is clearly a huge boost for the Carson project, which is competing with a similar plan in nearby Inglewood for an NFL team.

The Chargers, Raiders and St. Louis Rams have all threatened to leave their respective cities in the near future.

Of the three, St. Louis seems to have the most concrete stadium plans in place so its team doesn't head out west. The St. Louis stadium already has designs, a sponsor and is now working on funding and approval. (Video via HOK)

Iger will reportedly be in charge of the Carson project for five years with an option to buy a minority stake in the Raiders or Chargers after that. Iger's contract as Disney's CEO runs out in 2018.