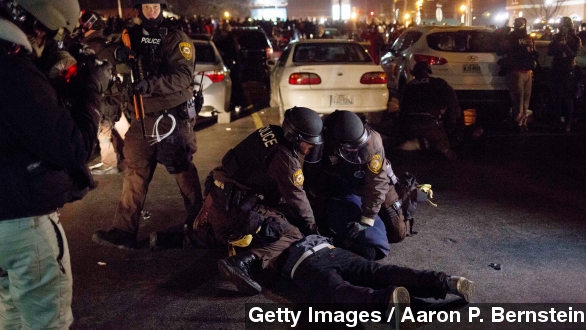 For the nation's police officers, routine traffic stops and arrests can obviously be dangerous work.

But activists say police aren't always honoring a duty to consider a suspect's mental illness when making arrests — something they say is covered under the Americans with Disabilities Act.

And now, the U.S. Supreme Court is examining just what special considerations police are required to take when arresting people who might be mentally ill.

"The last one was pretty much execution-style to her temple. The doctor said it was a miracle she survived each one, let alone all of them," Sheehan's sister Frances Sheehan told Al Jazeera.

That was the sister of Teresa Sheehan, discussing the five shots her schizophrenic sister sustained and survived after San Francisco police forced themselves into her room at a group home. Police say Sheehan was coming at them with a knife.

More recently, police shot and killed 17-year-old Kristiana Coignard, who walked into a police department in Texas with a knife and the words "I have a gun" written on her hand. It was later revealed she had bipolar disorder and depression.

In that case though — Zambrano-Montes's family members say they didn't know of any sustained mental illnesses. And that's where the difficulty of standardizing police tactics lies: How to quickly assess a suspect's mental capacity and then apply special considerations.

In some states, police are trained to work in Crisis Intervention Teams — CITs — "a program that trains officers to identify mental illnesses and other brain disorders and to deescalate situations involving individuals in crisis." Georgia, for example, is one of those states.

The Americans with Disabilities Act affords civil rights protections to people with both physical and mental disabilities.

But when it comes to the ADA, the law is vague — saying only "reasonable accommodations" should be made in arrests of people with disabilities.

"The promise of America isn't confined to any one race of class or group. It belongs to everyone," said President Obama in marking the 24th anniversary of the bill.

Lower courts have variously ruled on Sheehan's case, with a federal district court arguing special considerations for violent suspects with disabilities could be an undue burden on police. On the other hand, a circuit court of appeals sided more on the other side. The Supreme Court will hear arguments Monday.