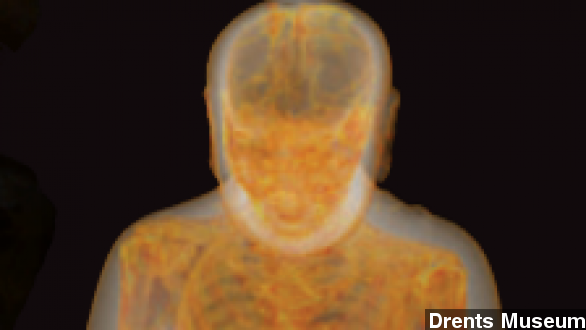 Followers of Buddhism have built statues honoring the Buddha for thousands of years, but one statue from China is attracting special attention.

This Buddha statue, which was on display in the Netherlands, has a mummy inside of it. CT scans revealed the presumed remains of a Chinese monk who was thought to have achieved the highest levels of meditation. (Video via RTV Drenthe)

The statue had been part of a mummy exhibit at the Drents Museum in Assen for more than a year but was taken out of the exhibit in September for more scans. (Video via Drents Museum)

The scans reportedly revealed scraps of paper with Chinese characters written on them where the mummy's internal organs should have been.

Multiple outlets report the mummy is thought to be a master meditator known as Liuquan, and it could be an example of self-mummification. (Video via RTV Noord)

As CNET explains, that process involved monks essentially starving themselves before consuming a toxic tea and being shut behind a boulder until they died.

The Buddha mummy will be on display next in Hungary as part of a Hungarian Natural History Museum exhibit.

This video includes an image from Andrea Schaffer / CC BY 2.0.