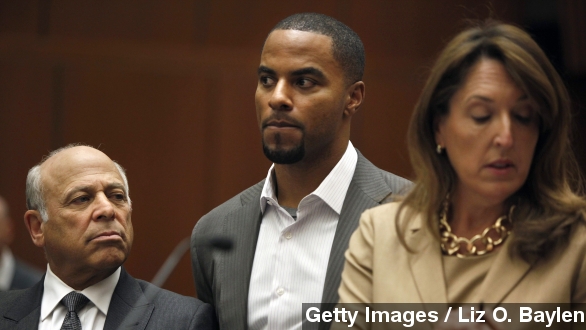 Former NFL safety Darren Sharper will serve around nine years in prison as part of a deal between his attorneys and the states accusing him of rape.

Sharper pleaded no contest in Los Angeles Monday, hours after pleading guilty in two other cases. He's expected to make another plea within the next month.

Sharper faced charges in four states: Arizona, Nevada, California and Louisiana. In each, Sharper was accused of drugging women, then sexually assaulting them while they were unconscious.

In all, he faced nine rape charges, but all nine have reportedly been settled thanks to the deal.

In Arizona, he was sentenced to nine years in prison immediately after his plea was entered. (Video via KNXV)

He also was sentenced to eight years in Nevada and 20 years in California, though he only has to serve half of the 20-year sentence with credit for time served. So, about nine years.

But Sharper's "global plea deal" means he'll serve all of his sentences concurrently, meaning he only has to stay in prison for the duration of the longest sentence — which has many saying the sentence is too light.

ESPN's Ashok Moore tweeted, "So if Darren Sharper was caught with a half-ounce of Marijuana he would likely have a longer sentence than raping numerous women. Got it."

Sharper played for the Green Bay Packers, Minnesota Vikings and the New Orleans Saints throughout his NFL career. He was hired by the NFL Network after retiring but was later fired when the rape allegations surfaced.

Sharper still has to enter his plea in Louisiana, where he faces a maximum sentence of life in prison. But sources tell The New Orleans Advocate he'll get a 20-year sentence that, just like in California, will be reduced to around nine years and will also be served concurrently.