How Cuba Went From Abolishing Christmas To Meeting Popes 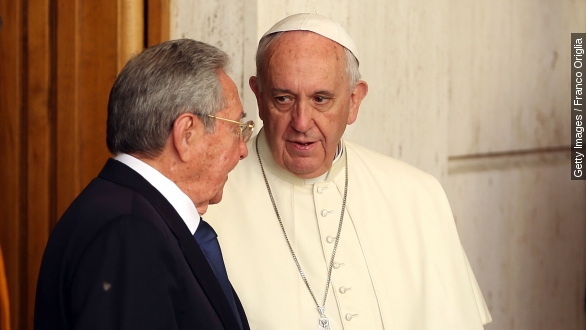 Cuban leader Raul Castro visited the pope on Sunday to thank him for his help in sorting out U.S.-Cuba relations.

And while it might seem weird for the pope to be publicly meeting with the leader of a regime that 46 years ago abolished Christmas, it's just part of a process started more than 20 years ago. (Video via Rome Reports)

Cuba has had a, well, complicated relationship with Catholicism since the revolution in the 1950s brought the Castros to power. (Video via History Channel)

Following the revolution, the government shut down Catholic schools, and scores of religious leaders left the country. (Video via CNN)

A recent survey in Cuba found 27 percent of responders were Catholic, and while that's a fraction of the Catholic Church's Cuban estimate of 60 percent, that's a fair amount for a country that was officially atheist for much of its history. (Video via Vatican)

That last designation changed from atheist to secular after the fall of the Soviet Union in the early '90s. Fidel Castro allowed Catholics to join the Communist party, Christmas was re-instated in 1997 and the next year, Cuba received Pope John Paul II in Havana. (Video via RT, C-SPAN, Archdiocese of Miami)

That set up a relationship between Cuba and the Vatican that would continue under Pope Benedict, who visited in 2012 and met with both Fidel and Raul Castro. (Video via ABC)

Nevertheless, while Pope Francis' ties to the communist country follow a pattern, he seems particularly suited to work with the Castro regime.

As Crux points out: "All this is familiar territory for Francis. ... In his writings before becoming pope, the Argentine church leader criticized Cuban state authoritarianism as well as the U.S. embargo, and called on both sides to talk out their differences."

And as Pope, Francis' role in normalizing relations has been well publicized, so it's not surprising that the pope is planning on becoming the third pope in less than 20 years to visit Cuba. (Video via CBS)

Pope Francis will be stopping in Cuba ahead of his planned visit to the U.S. in September.