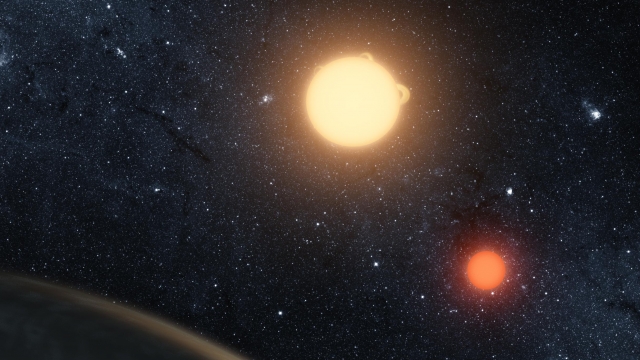 SMS
Multi-Star Systems Form When Gravity Gets Weird
By Evan Thomas
By Evan Thomas
October 26, 2016
Gravitational quirks can cause star-forming clouds to condense into pairs and groups of stars.
SHOW TRANSCRIPT

Multi-star systems are actually pretty common: We think nearly half of sun-type stars have a companion. Some have two or more. But how does a crowd of stars form all at once?

All stars start their formation the same way: Gravity pulls a whole lot of dust and gas into a ball. In a single-star system, the denser clump at the center eventually collapses and starts fusion. But if the system is going to end up with multiple stars, something else has to happen first.

One theory is that turbulence in that central core can shake it into multiple clumps — each of which can then become a star. This is one way to get pairs of stars in a close orbit around each other.

Or gravity can form clumps of material out in the disk of gas and dust that surrounds the core, the same way some gas giant planets form. Each clump's gravity pulls in other material, making it larger and increasing its gravity, and the process snowballs until there's enough mass for stars to ignite.

And sometimes stars will form from ribbons of gas and dust instead of a disk. This stretched-out version might explain why some binary stars are so far apart.

And these aren't just computer models anymore. We're finally getting telescopes powerful enough to see these formations in action, and so far the theories are holding up.