How Countries Get On, Or Off, US State-Sponsored Terror List 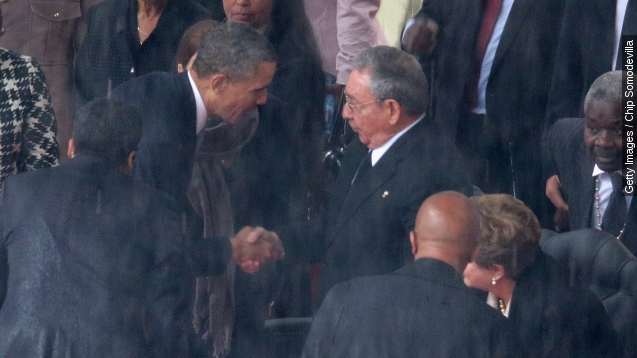 SMS
How Countries Get On, Or Off, US State-Sponsored Terror List
By Kate Grumke
By Kate Grumke
May 30, 2015
Now that Cuba has been removed, three countries remain on the State Sponsors of Terrorism list maintained by the U.S. State Department.
SHOW TRANSCRIPT

On Friday, Cuba was officially removed from the U.S.'s State Sponsors of Terrorism list. That leaves Sudan, Syria and Iran on the list. (Video via The White House)

That's a pretty small list, considering there are almost 200 countries in the world, and the U.S. isn't on great terms with all of them.

But what really matters is if the State Department says the countries have "repeatedly provided support for acts of international terrorism." If they're on the list, they're subject to economic sanctions and trading restrictions.

Cuba was first put on the list in 1982, for supporting leftist guerrilla movements in Latin America and Africa, according to the U.S. The State Department says Cuba hasn't sponsored international terrorism in the past six months, which is the deciding factor for being taken off the list.

Iran, Sudan and Syria are all on the list for supporting or not being tough enough on extremist groups, including Hamas, Hezbollah and Al-Qaeda. (Video via Channel 4)

In some ways it's surprising that those are the only countries on the list. More have been on it before, but were since taken off.

Iraq, Libya and North Korea were also on the list before. So was South Yemen, which was taken off the list when it later merged with North Yemen.

Yemen, Iraq, Libya and North Korea don't exactly sound like countries the U.S. sees as particularly friendly. But what matters is whether or not they're sponsoring international terrorism, and they can always be put back on the list.

So this doesn't mean Cuba is necessarily in the clear.

But for now it will see the benefits of the lifting of those sanctions. And this is an important step toward normal diplomatic relations between the U.S. and Cuba.