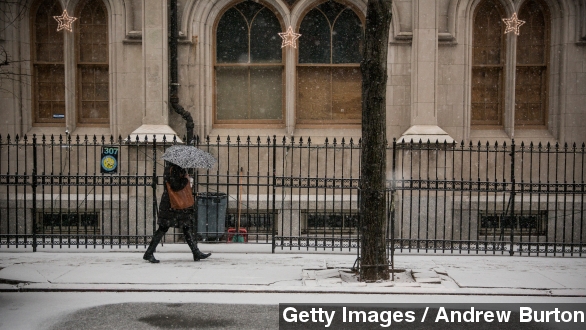 Looking to lose a little weight to jump-start your 2015? Turns out just spending time outside in the cold temperatures might do the trick.

The cold can raise levels of brown fat in the body — and yes, it's fat, but it can actually help a person lose weight.

In 2012, CBS reported scientists discovered this type of fat in adult bodies. It was previously thought to be found only in babies.

"In small amounts in the upper back, on the side of the neck, in the dip between the collarbone and the shoulder and along the spine," CBS medical contributor Dr. Holly Phillips said.

WebMD explains it's very different from white fat, which stores calories to use as energy.

To complete their study, researchers at UC Berkeley looked at mice that had increased levels of a protein called Zfp516, which is important for the process of forming brown fat in the body.

They looked at two groups of mice: one with high levels of this protein and another with normal levels. Both were fed high-fat foods. The Washington Post reports when exposed to cold air, the mice with more of the protein gained 30 percent less weight.

Maybe even more exciting, the researchers found this protein made the body's white fat burn energy like brown fat does.

"If you can somehow increase levels of this protein through drugs, you could have more brown fat, and could possibly lose more weight even if eating the same amount of food," the study's lead researcher said in a press release.

Brown fat and cold temperatures have been a popular topic for studies over the past few years.

The study out of UC Berkeley was published Thursday in the journal Molecular Cell.

This video includes images from Getty Images and daniel / CC BY NC 2.0 and music by Broke for Free / CC BY NC 3.0.