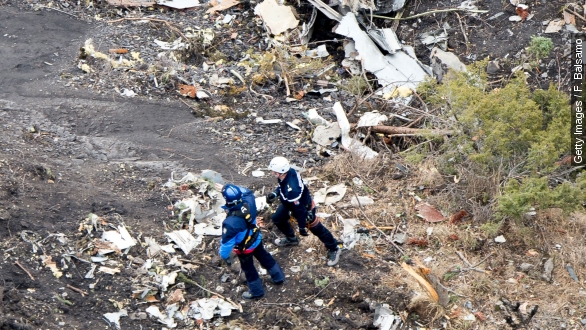 SMS
How Cockpit Security Measures Played Into Germanwings Crash
By Ben Lawson
By Ben Lawson
March 26, 2015
Measures designed to prevent intruders from accessing the cockpit allowed one pilot to lock the other out before the Germanwings Airbus 320 crash.
SHOW TRANSCRIPT

Safety protocols designed to keep intruders from accessing a plane's cockpit are in focus after Tuesday's crash of the Germanwings flight left 150 people dead.

On Thursday, French prosecutor Brice Robin said the plane's co-pilot, Andreas Lubitz, locked himself inside the cockpit before intentionally crashing the aircraft, killing everyone on board.

After the 9/11 terrorist attacks, flight security was ramped up dramatically across the board, including access to the cockpit.

The Germanwings flight was an Airbus A320. Its cockpit door has three modes: unlocked, normal and locked. (Video via Airbus)

The flight crew inside the cockpit can unlock the door when someone requests entry. There is also a keypad outside the door the crew can use if both pilots are unresponsive. However, a person can manually override that keypad from inside the cockpit and keep the door locked. (Video via Airbus)

An aviation expert told The Guardian: "The danger of the keypad is if the hostess knows the code and someone wants to get in there. ... The integrity only works because the only people who can open it are the ones inside the flight deck."

Recordings from the plane's blackbox indicate another pilot, who has not been identified, was outside the cockpit at the time of the crash and had repeatedly knocked on the door to attempt to get back inside.

The prosecutor investigating the Germanwings crash said, "The interpretation for us is that the co-pilot deliberately refused to open the door of the cockpit to the flight commander, and pushed the button causing a loss of altitude.”

Some countries, including the U.S., require a flight attendant to take a pilot's seat when one leaves the cockpit mid-flight. Regulations for the Germanwings airline allow a pilot to be alone in the cockpit but advise that time be kept to a minimum.