How Candidates Get Data on Your Voting, Shopping and Facebook Habits 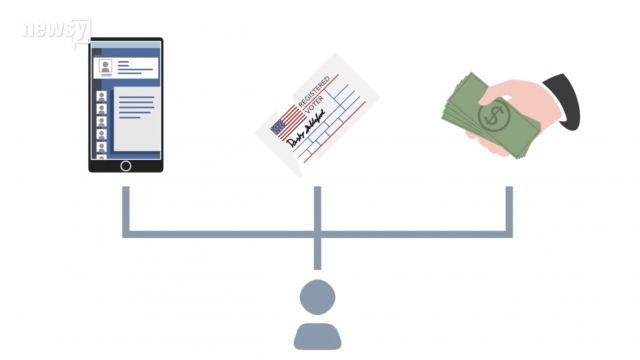 SMS
How Candidates Get Data on Your Voting, Shopping and Facebook Habits
By Jake Godin
By Jake Godin
February 10, 2016
Big data is playing an increasingly important role in elections. But when it comes to how that data is used, we're still in sort of the Wild West.
SHOW TRANSCRIPT

Presidential candidates want data. Specifically, data on you — anything from Facebook, your voter registration or even shopping habits that might help them get your vote.

If that data determines you're more of a values-based traditionalist, you could see ads like these online.

"Were it not for the transformative love of Jesus Christ…"

If the data determines you're more vigilant, you might see these.

"Their misguided plan would have given Obama the authority to admit Syrian refugees, including ISIS terrorists. That's just wrong."

Data mining for targeted ads like this happens to be the strategy of Republican presidential candidate and Texas Sen. Ted Cruz.

Even though he's fought against excessive data collection.

"The federal government should not be collecting the data of millions of law-abiding citizens," Cruz said during a U.S. Senate hearing on NSA surveillance.

This kind of big data is playing an increasingly integral part in presidential campaigns. Although for most of the other candidates, it's not quite as specific.

Take email address data, for example. Those emails you get with the weird subject lines — like "Friend, let's meet" or "I'm worried about you" — are fundraising strategies. As weird as it is, it works.

In the past two elections, President Obama used email to make hundreds of millions of dollars through campaign donations.

Yes, some data is publicly available and easy for anyone to find. But some of it, not quite so much. Purchasing habits, income, magazine subscriptions — all of this is culled by campaigns to target potential voters.

Candidates can also tap into voter registration databases for info like a person's name, address, voting history and phone number.

This is partly due to the Help America Vote Act of 2002, which required all states to have residents' voter info stored in one central database. It's open-ended, so states can decide how to store the data and who can access it.

That open-endedness means access to the data is different for every state. Some have completely unrestricted access, while others are more strict and require the data to be used only for political purposes.

That's where a data collection company comes in. For hefty sums, groups like NationBuilder take this information and make it available to candidates.