How California Oil Spill Could Hurt 'Galapagos Of The North' 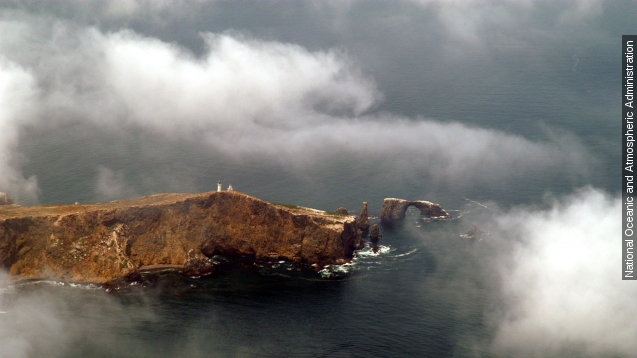 California's Channel Islands are often called the "Galapagos of the North" because of their biological diversity. (Video via U.S. National Park Service)

They harbor close to 150 species of plants and animals that can't be found anywhere else, including the island fox. (Video via The Earth Minute)

The islands are also in the area affected by last week's oil spill, which dumped more than 100,000 gallons of oil into the Santa Barbara Channel. (Video via KERO)

While the islands are some 50 miles from the site of the spill, and land-dwelling species probably won't be affected, it's hard to gauge the impact on marine life.

That's because the oil won't harm a lot of its victims directly — instead, experts say oil does the worst of its damage killing off plants and tiny animals at the bottom of the food chain, disrupting the ecosystem. (Video via Al Jazeera)

Dolphins and whales are common sights along the islands, and they both feed on krill, tiny crustaceans that are more vulnerable to the oil. (Video via YouTube /  richyacco)

The 1969 oil spill that pumped some 3 million gallons into the channel was blamed for the deaths of some 3,500 sea birds alone.

If there's good news, it's that this latest spill is a tiny fraction of that one: The pipeline was pumping well below capacity at the time of the spill. Investigators have yet to determine the exact cause of the leak. (Video via CNN)

This video includes an image from the U.S. Geological Survey.