How Bird Feeders Can Be Bad (And Good) For Birds 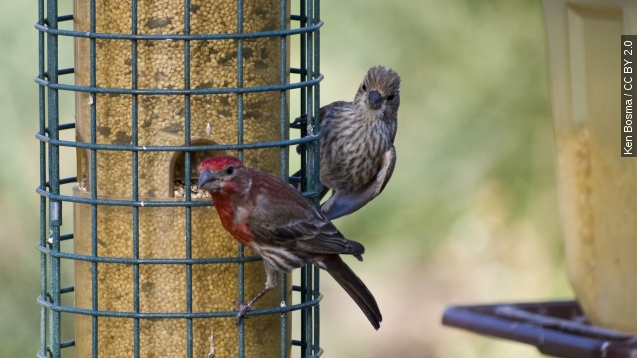 Getting a bird feeder seems like a no-brainer for a bird lover. You get a front-row seat to the birds you love, while helping them survive. But they may not always be good for the birds.

New research shows the feeders are linked to higher rates of conjunctivitis among house finches, which can blind them. (Video via YouTube / John Berthoty)

While it might not seem significant, it illustrates how the feeders, which put a lot of different birds in close proximity, can spread infectious disease. (Video via YouTube / seahue)

And birds, in turn, can often spread disease themselves. The avian flu scare comes to mind, but they're also sometimes vectors for West Nile virus. (Video via ABC)

But feeder diseases are often much worse for the birds: Salmonella is one common killer, as well as avian pox. Not to mention parasites like mites and lice, which can cause birds to abandon their nests. (VIdeo via YouTube / BikeTrikeNTrail, YouTube / Tio Dave)

That doesn't mean feeders don't help birds: They do. As development continues to destroy bird habitats, feeders can often be a vital source of food. (Video via KXAN)

That's especially true during the winter, when non-migratory birds have to scavenge for food to stay alive.

Still, while the positive results of bird feeding are obvious and well documented, the potentially negative ones aren't.

One hypothesis the researchers in those studies offered was the birds' diets were unbalanced and that feeders could've been placed in less-than-optimal nesting locations. (Video via QVC)

"When feeders are close to a window, a bird leaving the feeder cannot gain enough momentum to do harm if it strikes the window."

As for disease? The researchers noted studying the feeders has given them valuable insight into how diseases are spread among birds, opening the door for better management.