How An Oil Tycoon Will Pay His $995M Divorce Settlement 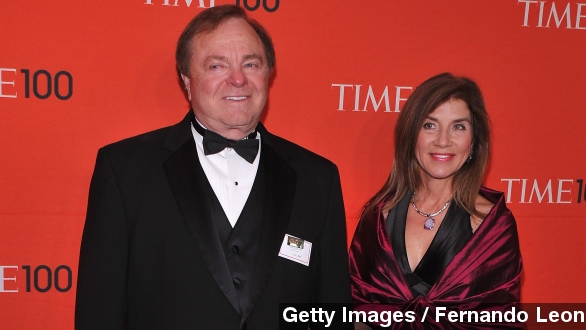 SMS
How An Oil Tycoon Will Pay His $995M Divorce Settlement
By Katherine Biek
By Katherine Biek
November 11, 2014
Oil tycoon Harold Hamm has been ordered by an Oklahoma judge to pay his ex-wife $995.5 million in a divorce settlement.
SHOW TRANSCRIPT

It's one of the largest divorce settlements in history. A judge has ordered Oklahoma oil tycoon Harold Hamm to pay his ex-wife Sue Ann Hamm $995.5 million.

NBC explained how the massive settlement breaks down.

"One word: installments. According to the filing, just over $322 million must be paid by the end of 2014. The remaining $650 million will be paid out on a monthly basis — at least $7 million a month."

So what to do with all that money? ABC thought it would be fun to find out what one can get for $7 million.

"How about 140 2015 BMW convertibles? Seventy Kentucky Derby contenders? Or a little getaway like this in the Hollywood Hills?"

The couple didn't have a prenuptial agreement. The settlement represents just a fraction of the Continental Resources CEO's wealth.

The New York Times reports Harold Hamm is the 24th richest man in the U.S. with his net worth of more than $18 billion.

Forbes' Christopher Helman writes, "This is a very positive outcome for [Harold] ... who may have been somewhat concerned that an adverse ruling could have forced him to sell enough shares to dilute his stake below 50%."

Sue Ann Hamm is also getting some real estate in the settlement in addition to the cash.

The couple's divorce settlement looks positively normal though, next to the roughly $4.5 billion a Russian oligarch was ordered to pay his ex in May.

The media speculated it was the most expensive divorce ever.

CNN reports trusts for the Hamms' two daughters won't be affected by the divorce settlement.