How American Police Became So Militarized 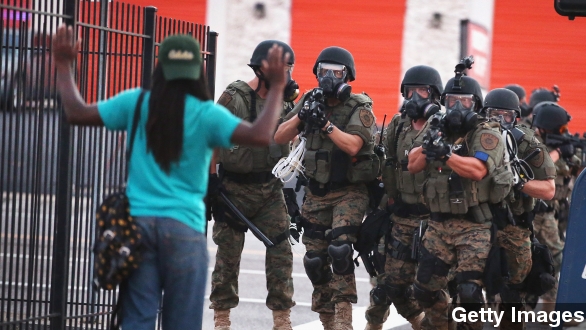 By Zach Toombs
August 12, 2014
The shooting of an unarmed black teenager in Ferguson, Mo. has brought out protesters, rioters and a heavy-handed police response.
SHOW TRANSCRIPT

It might have started with the War on Drugs, but it's the War on Terror that has taken police militarization in America to whole new levels and created scenes like these.

ST. LOUIS POST-DISPATCH: "They started throwing tear gas and shooting rubber bullets at all the protesters, telling us to go home. We live here."

That's the situation on the ground in Ferguson, Mo., where the shooting of an unarmed black teenager led to riots in the streets — which in turn led to a police crackdown, using SWAT teams, rubber bullets, tear gas cannisters and armored vehicles. Ferguson looks less like the Midwest and more like a war zone.

And actually, there's a reason police across the U.S. are looking a lot like soldiers these days. It's pretty straightforward. More and more police departments have easy access to military equipment.

In fact, weapons originally meant for battlefields in Afghanistan and Iraq are finding their way straight back home to U.S. police forces. The Pentagon's 1033 program makes that possible. It's passed by Congress every year as part of the defense budget and allows for extra military weapons and equipment to be transferred to law enforcement at almost no cost to police.

Congress first passed that 1033 program in 1991, with a worthy goal in mind: keeping police safe. But more than 20 years later, the program's consequences are controversial.

Few states keep records on how often SWAT teams are used for raids like this or for riot control. But criminologist Peter Kraska estimates there are somewhere between 50,000 and 80,000 SWAT raids in America each year — and that the number is growing.

Writing for The Washington Post, criminal justice blogger Radley Balko says, " It’s past time for a public discussion about whether that sort of figure is appropriate and consistent with the values of a free society."

And a moral discussion aside, some critics say paramilitary policing only makes a situation more dangerous. Take, for example, police reaction to protests over the World Trade Organization's 1999 meeting in Seattle, using tear gas and military equipment.

Seattle's police chief would later write, "Windows were smashed, stores were looted, fires lighted; and more gas filled the streets, with some cops clearly overreacting, escalating and prolonging the conflict."

And in Ferguson, it's a familiar scene.