How A 'Rule Of Thumb' Could Slow Down Drinking 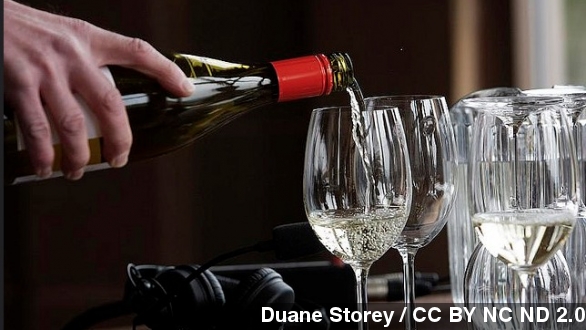 SMS
How A 'Rule Of Thumb' Could Slow Down Drinking
By Katherine Biek
By Katherine Biek
August 28, 2014
A study suggests people who follow a "rule of thumb" when pouring wine dispense less than those who don't have a particular amount in mind.
SHOW TRANSCRIPT

​​Many of us have been there: We're drinking a glass of wine, and then somehow one glass turns into a few glasses ...

But could controlling the amount of wine in each of those glasses keep people from going from slightly tipsy to texting all their exes? (Video via YouTube / barexchange)

Researchers at Iowa State University and Cornell University set out to discover just that. They asked staff and college students to pour glasses of red and white wine.

They discovered the people who followed a "rule of thumb," like half a glass per pour, dispensed less wine than those who poured without a particular amount in mind. Overall, about 70 percent of participants used a half-glass guideline, and that group tended to pour about 20 percent less wine.

Interestingly, BMI seemed to affect the men but not the women. HealthDay reports men with a high BMI — meaning they're considered overweight — poured 31 percent more wine. And even those with BMIs that fell in the middle of the average range poured 26 percent more wine.

In a press release, the researchers said they were correct in assuming the men would pour more wine than the women. But they discovered there was one exception.

Medical Daily reports the study concluded social norms might be coming into play here, saying women tend to compare how much they're drinking to other women around them.

According to the National Institute on Alcohol Abuse and Alcoholism, a standard glass of wine is 5 ounces. And the U.S. Department of Health and Human Services defines moderate drinking as "up to one drink per day for women and up to two drinks per day for men."

A study conducted by the same researchers last year looked into the impact of glass size and shape on how much alcohol people pour.

A writer for CBS says participants poured 12 percent more alcohol into a wide glass than a narrow one. More alcohol was also poured when the person was holding onto the glass.

This newest study is published in the International Journal of Drug Policy.