How A New Dinosaur Could Help Science And 'Jurassic Park' 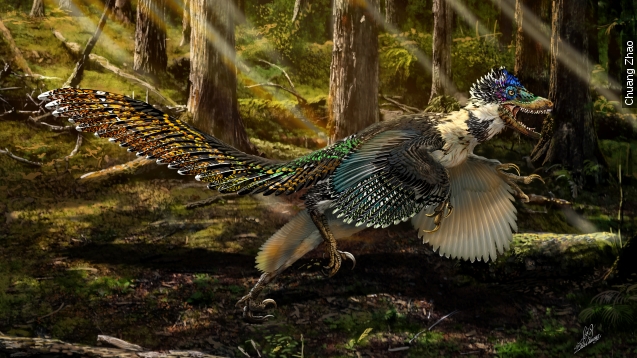 Two of the biggest problems scientists had with "Jurassic World" were with its raptors. (Video via Universal Pictures / 'Jurassic World')

"A lot of raptors were small and lightly built; those guys look a little bit like they're on steroids," a paleontologist told Downtown Podcast.

A paleontologist he spoke with explained, "It fundamentally changes how you imagine these animals looked and behaved."

But paleontologist Steve Brusatte may have a solution to both of those problems.

"If they want something a little bit bigger and something maybe even a little bit scarier, then I am very happy for the producers to go with Zhenyuanlong," Brusatte said.

He was on a team that recently found a close relative of the raptor in China.

"But it's quite a bit bigger, almost the size of a mule something like that," he explained. "It would have been about 2 meters long, it would've weighted about 20 kilos or so."

Zhenyuanlong's significance lies in its arms — or rather, wings.

It raises a lot of questions about the function of feathers and wings and how exactly they came about. (Video via Cornell Lab of Ornithology)

Brusatte posited: "Maybe these wings were being used for display. Think of what a peacock does with its tail. It's not flying with that tail, but it's using it to attract mates or to scare off its rivals. Or maybe this new dinosaur was using its wings to protect its eggs or its nest — or maybe for something else." (Video via YouTube / deepaksankat)

But that's a good thing.

"For those of us that study fossils, that's a great thing because we love questions. This is now something else that we can go out and try to study," Brusatte said.