How A Bipartisan Bill Would Change No Child Left Behind 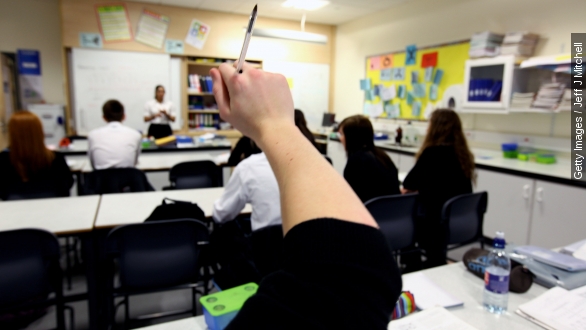 Two Senators from opposite sides of the aisle said Tuesday they have a plan to fix No Child Left Behind. Republican Lamar Alexander and Democrat Patty Murray's bill is called the Every Child Achieves Act of 2015.

The bill addresses some of the main complaints about No Child Left Behind, including the law's heavy reliance on standardized tests to determine how schools are doing and the high level of federal involvement in regulating education. (Video via U.S. Department of Education)

Here are a few of the key changes this bill would enact.

It would still have federal testing — beginning in the third grade — but would put states in charge of setting their own performance standards and let them handle struggling schools.

States would also have to take into account other success measures, such as graduation rates and how prepared students are for post-high school education or the workforce, but they could choose to consider other factors, as well.

When states identify schools that are struggling, the act would provide federal grants to improve those schools. It also includes changes for teachers, including resources for professional development and an end to federally required teacher evaluations.

Murray said in a statement the bill "gives states and districts more flexibility while maintaining strong federal guardrails, and helps make sure all students get the opportunity to learn, no matter where they live, how they learn, or how much money their parents make."

The bill is up for a vote next week in the Senate Health, Education, Labor and Pensions Committee.