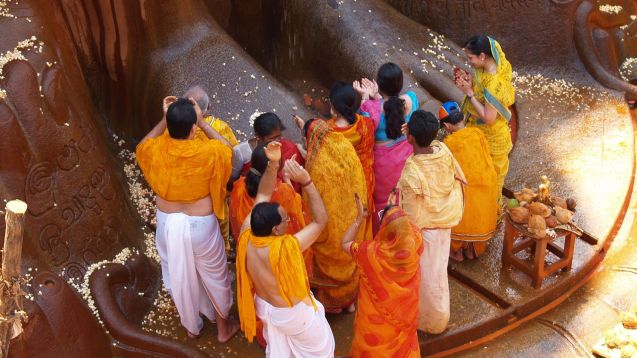 For several weeks, India has seen protests and debates over a fasting practice that involves refusing food to the point of death — and the case could take years to resolve.

The ritual is known as santhara, and it's practiced by some members of the Jain religion who are near the end of their lives.

A state court banned the practice in August saying it violated the law against suicide, meaning anyone who assisted in santhara could be arrested. But for the time being, the practice can continue.

India's Supreme Court deliberated for less than a minute this week before putting a hold on the ban. The hold makes the practice temporarily legal again until a full court decision can be reached.

The case began in 2006 after a lawyer and anti-santhara activist filed a public interest case. He called the practice a social evil and suggested some families were forcing older members to take santhara to lessen the load on the family. (Video via News9)

But the ban's protesters have said the practice shouldn't be considered suicide. Instead, they portray it as a centuries-old religious rite that's considered honorable among many Jains.

The Indian Express quotes a petition submitted to the Supreme Court saying the practice is "a conscious process of spiritual purification." (Video via India Today)

"We are thinking of the next journey. You see, in all religion the art of living is taught, how to live a good life. But in no religion [is it] taught how to die. So santhara is basically an art of dying," A.K. Jain, an advocate for religious understanding, said in an NPR interview.

It could be awhile before we know the final verdict on santhara. The case will have to go before the Supreme Court again in a full hearing, and it could be several years before that happens.