How 2014 Shaped The Future Of The Internet 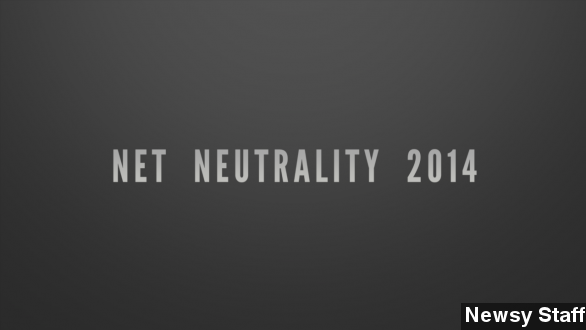 SMS
How 2014 Shaped The Future Of The Internet
By Evan Thomas
By Evan Thomas
December 18, 2014
It has been a long, busy year for Net Neutrality. The stage is set for an expected landmark FCC decision sometime in 2015.
SHOW TRANSCRIPT

The year is drawing to a close, and the jury — or, more accurately, the FCC — is still out on the question of Net Neutrality.

The core concept is one of a democratic Internet: that everything sent across the global network is of equal value. By extension, service providers should act as common carriers — which means they shouldn’t be setting different fees for different types of content, or outright deciding what gets through and what doesn’t. That should be up to the end user.

But in January of 2014, the U.S. Court of Appeals ruled the FCC didn’t have the authority to force Internet Service Providers, or ISPs, to play by common carrier rules.

This kicked off a yearlong fight over the future of the Internet. Activists, tech companies, human rights organizations, politicians and denizens of the Internet have spent 2014 pressuring the FCC to patch what they see as a new loophole in the rules — which ISPs could use to discriminate against specific content, charge more for its transfer and block out smaller creators who can’t pay up.

Current calls for reclassification under Title II are a reference to the Telecommunications Act of 1996. Its provisions for broadcast services could act as that patch — by classifying ISPs as common carriers.

The FCC would then be able to regulate them in much the same way the government regulates utilities. The so-called ‘fast lanes’ would be prohibited.

The idea even got endorsement from President Obama in November, who called on the FCC to make the reclassification.

But it’s not a perfect solution, as one contributor to The Hill points out:

“These regulations make sense for electric, gas, and landline phone service, since there isn’t a way for utility companies to deliver services in a significantly more innovative way than competitors who use the same technology and infrastructure to deliver the same product.”

“Your smartphone, the Internet, the apps; all of this is outside of Title II. The innovation is happening without having to go to government regulators and say ‘mother, may I?’,” Cruz said.

His Obamacare comparison drew fire both from industry watchers and from those on the other side of the aisle. The more polite of his critics — including Minnesota Senator Al Franken — called the opposition misguided.

“He has it completely wrong and just doesn’t understand what this issue is,” Franken said. (Video via CNN)

The telecom industry seems worried about its innovation, too. Electronista quotes one AT&T official, who says “If the FCC puts such rules in place, we would expect to participate in a legal challenge to such action.”

“We cannot be good stewards of our shareholders’ capital and make these investments and not really understand how these are going to be regulated in three years.”

Getting a stance out of the FCC amid all the back-and-forth has been like pulling teeth.

After the White House weighed in, FCC chairman Tom Wheeler distanced himself from Obama’s comments, repeatedly telling meeting attendees “I am an independent agency.” (Video via NCTA Cable)

He explained he has to try to steer any rules in a way that makes everyone happy. The current FCC position, then, appears to be a hybrid one.

It would apply Title II-style common carrier regulation to the wholesale side of the Internet, where companies such as Netflix and Amazon send their content to ISPs. The interface between ISPs and end consumers would be less regulated.

ISPs wouldn’t be able to discriminate against provider traffic — but there would be no such guarantees for the consumer side of things. Reception has been lukewarm, to say the least.

In any case, the FCC’s next move isn’t expected until later. According to Re/Code, FCC staffers say the agency won’t be making any official announcements until 2015.