Hoverboards Are On Fire — Literally And Figuratively 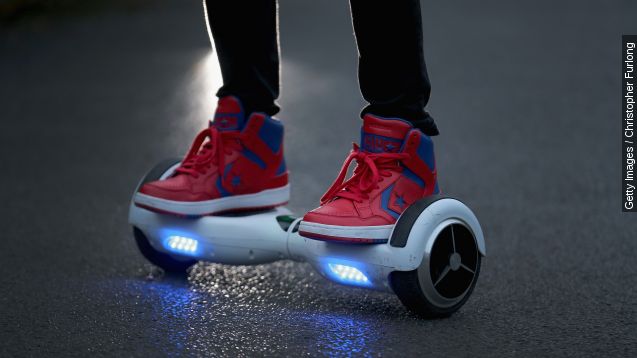 SMS
Hoverboards Are On Fire — Literally And Figuratively
By Katie Link
By Katie Link
December 9, 2015
From nationwide riding bans to exploding into flames, hoverboards might be something to scratch off the wish list this year.
SHOW TRANSCRIPT

Self-balancing scooters. Two-wheel hoverboards. Mini Segways without handles. Whatever you want to call these devices, they're blowing up. In popularity and in actuality.

"Before I could yell 'the house is on fire,' the middle part that would go in between your feet just poof into flames," Jessica Horne said. (Video via WGNO)

This brand-new hoverboard, powered by a lithium battery, was charging when it caught fire damaging a family's home.

Another hoverboard overheated and exploded at a Washington mall, sending shoppers scurrying. (Video via ABC)

But the item is still plenty popular. EBay claims it sold a hoverboard every 12 seconds on Cyber Monday and stores like Wal-Mart and Target have already been out of stock this holiday season.

According to the Consumer Product Safety Commission, at least eight people have been treated for injuries related to hoverboards. Though so far, none from fires. Perhaps poor balance was to blame for those accidents.

Across the pond, thousands of the boards have been impounded at U.K. ports after failing basic safety checks. And Britain's not amused: The hoverboards are banned on public streets and sidewalks.

The same is true in New York City. Riding a hoverboard there could cost you $500. Though that law has only been in effect for a few weeks, and it seems like the New York Police Department isn't totally on the same page yet. (Video via WABC)

"I saw in the news that they were making these things illegal. Have they said anything to you about them being illegal?" a man asks a New York police officer.

"They're not illegal, not that I know of," the officer responds. (Video via YouTube / Casey Neistat)

Then there's always the risk of being restrained at U.S. customs. But as far as we know, that's only happened to Wiz Khalifa.