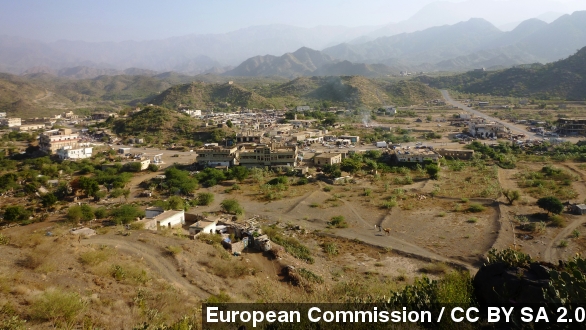 U.S. Navy warships have reportedly moved into position to evacuate the American embassy in Yemen Tuesday after Shiite Houthi rebels took over the presidential palace.

Tuesday's raid comes just one day after government forces and rebel fighters signed a ceasefire. The BBC reports Houthi fighters also shelled the Yemeni president's home inside the city of Sanaa. Then the Houthi leader went on TV to outline his demands and deny he was executing a coup.

The Houthi fighters and Yemen's government have been locked in a power struggle since September, but things descended into further chaos when the two factions couldn't agree on a power-sharing deal. The rebels later abducted the Prime Minister's chief of staff to disrupt a meeting on the country's draft constitution, which the Houthis oppose. (Video via Al Jazeera)

An instable Yemen presents a problem for the U.S. The Wall Street Journal writes, "The U.S. has provided Yemen with nearly $1 billion in economic, military and humanitarian aid since 2011, and the country has played an important role in U.S. counterterror strategy."

Yemen is the home base for Al Qaeda in the Arabian Peninsula, also known as AQAP, the organization that claimed responsibility for the attacks at a newspaper and a Kosher market in Paris, France nearly two weeks ago. (Video via France Télévisions)

There are unconfirmed reports out of Yemen saying the country's president was in his home when it was shelled by Houthi fighters, but an official told news outlets he is safe.