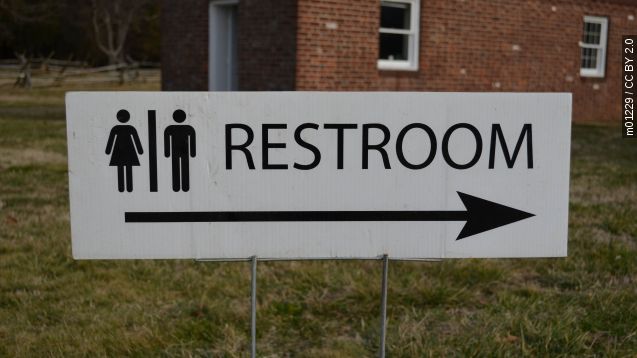 SMS
Houston Voters To Decide On So-Called Bathroom Ordinance
By Katie Link
By Katie Link
November 1, 2015
The Houston Equal Rights Ordinance is gaining a lot of attention following the release of several campaigns calling it the "bathroom ordinance."
SHOW TRANSCRIPT

"Vote 'no' on Houston's Proposition 1. It goes too far." (Video via Campaign for Houston)

That campaign ad's talking about Proposition 1, also known as the Houston Equal Rights Ordinance, or HERO, which aims to eliminate discrimination in Houston and will be voted on Tuesday.

Opponents of the proposition have dubbed it "the bathroom ordinance," and it's become a national issue for LGBT rights activists. (Video via Campaign for Houston)

If adopted, it would ban discrimination in all instances, including gender identity, in city employment, services and contracts, public accommodations, private employment and housing.

But a lot of the debate surrounding the ordinance has to do with that "public accommodations" part.

Supporters of Proposition 1 accuse groups like Campaign for Houston of fearmongering through their ads.

A transgender rights activist told The Washington Post, "I don't care who you are, you belong in one of those 15 categories. This literally is going to protect everyone in the city. Trans women are literally being painted like boogeymen here, the monster under the bed."

Some Houston business leaders say they're fearful a rejection of the ordinance would hurt the local economy. (Video via Expedia)

"When you have a situation where you're viewed as not being diverse, not being open, not being anti-discriminatory, it's just another mark on the scorecard," Houston business owner Ric Campo said. (Video via KHOU)

Houston is the biggest U.S. city to elect an openly gay mayor, but HERO has had a rough history since Mayor Annise Parker introduced it last year.

"Every major city in America, except the city of Houston, has a comprehensive ordinance that prohibits discrimination among a number of different classes or groups of individuals and provides for local remedies to those individuals," Parker said. (Video via The City of Houston)

In May 2014, the Houston city council approved the measure. Then, opponents moved to have it struck down and the issue was sent to the Texas Supreme Court. After review, the ordinance was put on a ballot. The city will vote on Proposition 1 Tuesday.