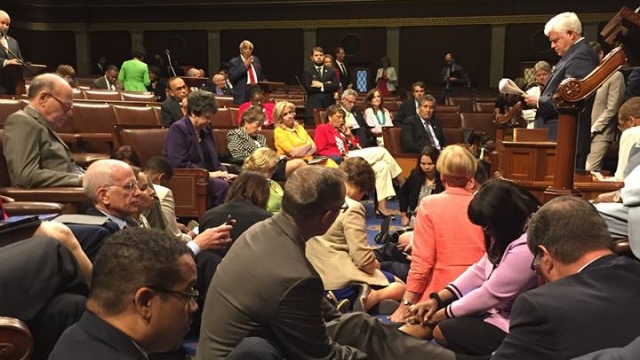 House Democrats are sick of inaction on gun control legislation. So they took over the floor with an old-school sit-in.

As usual, it was broadcasting live on C-SPAN. Until House Speaker Paul Ryan, who controls the House cameras ordered them to be turned off.

"This is a publicity stunt. They're trying to get you to ask me those questions for publicity's sake. This isn't trying to come up with a solution to a problem; this is trying to get attention," Ryan told CNN.

C-SPAN's live floor feed isn't actually controlled by C-SPAN. And House cameras are typically turned off during recess — but usually no one is still on the floor.

So Dems used social media to show the sit-in. Video and pictures were tweeted along with Periscope and Facebook live streams.

House speakers have shut out representatives during a protest before.

In 2008, then-Speaker Nancy Pelosi turned off the cameras, the mics and the lights on GOP lawmakers.