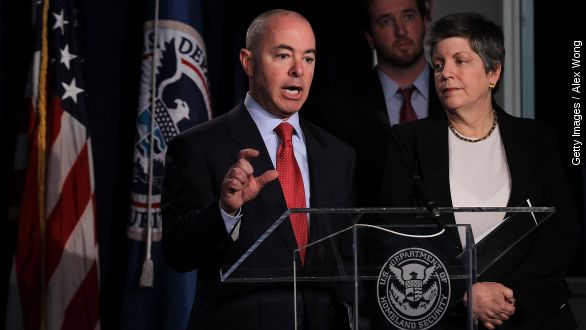 "With growth in a program comes the potential for challenges to the program's integrity," Alejandro Mayorkas said.

Homeland Security's No. 2, Deputy Secretary Alejandro Mayorkas, is being accused of "political favoritism" after allegations he improperly intervened in the visa cases of three politicians — all Democrats.

Homeland Security Inspector General John Roth issued a 99-page report earlier this week regarding the accusations against Mayorkas that occurred when the now-Homeland Security deputy secretary was the head of U.S. Citizenship and Immigration Services. (Video via U.S. Department of Homeland Security)

On Thursday, Roth is expected to testify on those accusations in front of a House Homeland Security Committee.

The report highlights three allegations in particular, all involving politicians, all Democrats, seeking special visas for foreign investors. One involves a casino project by Sen. Harry Reid, another an electric car company by Terry McAuliffe and another involving Anthony Rodham, the brother of Hillary Clinton.

Breitbart reports several prominent Republicans have publicly sounded off on the allegations against Mayorkas, all questioning Mayorkas' ability to lead.

As Politico points out, Mayorkas has revised his tone on the matter since January.

He told investigators earlier this year "a complete and total repudiation of the allegations against me is the only correct and just conclusion." But in a statement Tuesday, he said, "While I disagree with the Inspector General's report, I will certainly learn from it and from this process."

Mayorkas is not expected to appear before the House Committee on Thursday.

This video includes images from Getty Images and Miller Center / CC BY 2.0.