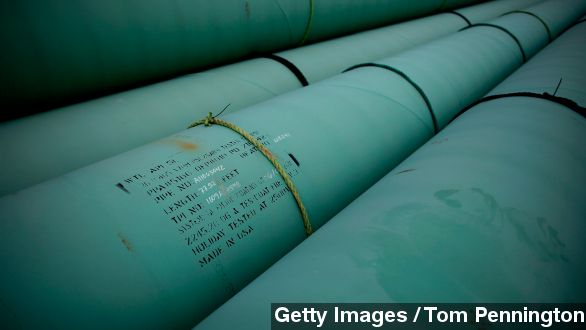 SMS
House Approves Keystone XL Pipeline Bill Despite Veto Threat
By Jake Godin
By Jake Godin
January 9, 2015
The Republican-controlled House easily passed legislation that would speed up the construction of the Keystone XL pipeline despite a veto threat.
SHOW TRANSCRIPT

House Republicans approved a bill for the Keystone XL pipeline hours after the Nebraska Supreme Court tossed a lawsuit that would have blocked its construction.

The House voted 266-153 in favor of the bill speeding up the construction of the controversial pipeline. That's despite a veto threat President Obama made earlier.

White House spokesman Eric Shultz released a statement saying the administration plans to let the Keystone XL process play out in Congress but that a veto is still guaranteed from the president.

But Alaska Republican Sen. Lisa Murkowski, who chairs the Senate Energy and Natural Resources Committee, said, "Regardless of whatever new excuse he may come up with, Congress is moving forward."

The new Republican-controlled Senate will vote on similar legislation in the coming weeks.