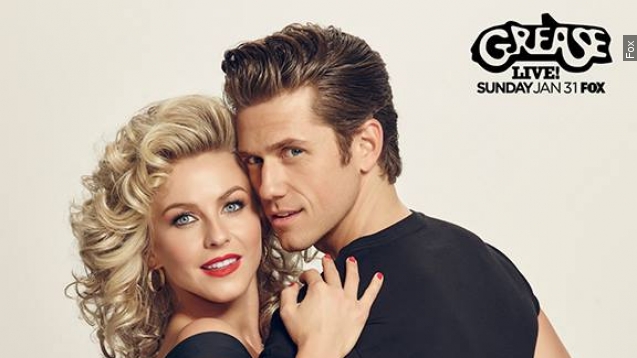 SMS
Hough Is Making Us Do A Double Take In New 'Grease' Poster
By Lexie Hammesfahr
By Lexie Hammesfahr
November 23, 2015
Fox released the first look at Julianne Hough as Sandy from "Grease." She will play the iconic character in a live performance in January.
SHOW TRANSCRIPT

When Fox announced Julianne Hough would play Sandy in its live performance of "Grease," the star said in a statement that the role was a dream of hers.

And now that we have our first look at Hough as Sandy, we can see why. Two words: spitting image.

The resemblance is uncanny — and her appearance seems to bode well for her when it comes to reprising iconic characters.

In the past five years, she has landed the lead female role in "Footloose" and now "Grease," something even Olivia Newton-John can't attest to.

And she's usually cast as the goody two-shoes when she does take on a new role. Remember "Rock of Ages"?

Hough might look the most prudish in this poster, which shows Sandy's nice-girl side, as opposed to the iconic all-black pantsuit most people associate her character with.

Hough will perform alongside Aaron Tveit as Danny Zuko and Vanessa Hudgens as Betty Rizzo in Fox's live show Jan. 31.

This video includes images from Getty Images and Fox.