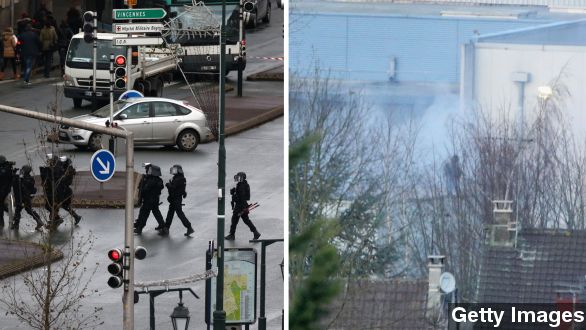 By Lauren Zima
January 9, 2015
At least some of the hostage takers at a supermarket and a printing plant in France were killed Friday evening.
SHOW TRANSCRIPT

Early Friday evening in Paris, at least some of the hostage-takers in two standoffs were reported dead.

"A convoy of ambulances sweeping into the village, possibly going to try to tend to any wounded," CBS reports.

Before the news of the deaths, reports of explosions and gunfire at both locations — one at a supermarket and the other at a printing plant.

As of Friday evening, a total number of casualties was unclear, but the BBC reported at least four hostages had been killed at the supermarket standoff before it was stormed.

"Three ambulances going in there, indicating the possibility of casualties on the scene," CNN reports.

"This strikes me as being a remarkably effective and efficient operation," CBS reporter Bob Orr says.

At the printing plant, two suspects in Wednesday’s Charlie Hebdo attack had taken at least one person hostage. Reports suggested a hostage-taker at the supermarket was linked to those suspects.