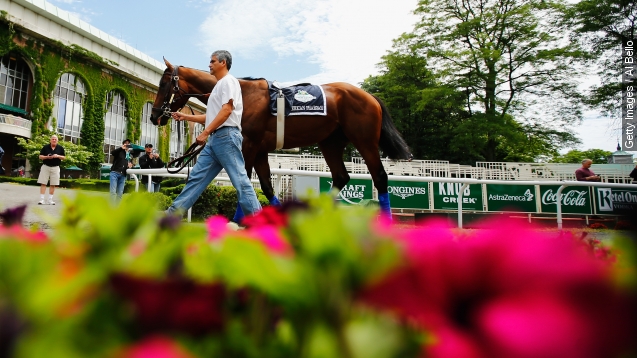 SMS
Horse Racing Doesn't Need A Triple Crown Winner
By Cliff Judy
By Cliff Judy
June 4, 2015
While the sport would love to break a 37-year streak of not having a horse win the Kentucky Derby, Preakness and Belmont Stakes, it doesn't need that.
SHOW TRANSCRIPT

This is exactly what horse racing needs. A massive, gimmicky-named, 3-year-old thoroughbred with photographers trailing his every move and a shot at winning the sport's first Triple Crown in four decades. (Video via NYRA TV)

Notice I said "a shot" at winning the Triple Crown. They don't really need a winner.

American Pharoah is already on Long Island getting acclimated to the track at the Belmont Stakes, a notoriously difficult mile-and-a-half oval of dirt. (Video via The New York Racing Association)

"It's been known as the graveyard of champions for a reason," said John Sabini, chairman of the New York State Racing and Wagering Board.

"These horses have never raced a mile and a half, and most of them will never do it again," said horse trainer Dale Romans. (Video via SB Nation)

Now, to hear others tell it, this is where horse racing's dreams have faded from their glory since Affirmed last won the Triple Crown in 1978.

"The 39th renewal of that classic of harness racing, the Hambletonian!" Universal Newsreel's Ed Herlihy said.

There's no doubt horse racing's popularity is nothing compared to its heyday of the mid-20th century when some say the races and boxing rivaled baseball as America's favorite sport. (Video via U.S. National Archives)

And there are certainly a lot of opinions out there that the sport is either dying or in desperate need of a Triple Crown winner to win back Americans' hearts.

But you need look no further than the Kentucky Derby to see the sport is nowhere near disappearing and has actually found itself a niche — a second- or even third-tier niche that's more about spectacle and decadence than the race itself, but a niche nonetheless. (Video via Lexington Herald-Leader)

NBC also just inked a long-term deal to broadcast the Belmont Stakes through 2020. And both horse racing and the network have already gotten what they wanted out of this year's races — a horse at Belmont with two wins drawing in extra viewers who want to see if it can get a third. (Video via NBC and NYRA TV)

That's really all the sport can ask for because let's face it — American Pharoah's stardom begins its decline and horse racing its annual hibernation Sunday.

Even with a Triple Crown win, it's not like Pharoah's coming back for a repeat next year.