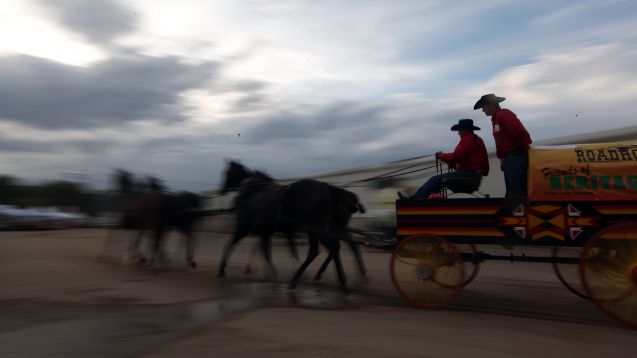 Two racing horses have been put down after sustaining severe injuries in separate crashes at the Calgary Stampede in Alberta, angering animal rights groups. Three chuck-wagon drivers were either fined or penalized because of the deaths.

The Calgary Stampede says horses are checked daily before races to ensure they are fit.

"We have had fewer preventable injuries due to conditions we could detect," a representative said during a press conference.

But the Calgary Stampede has come under fire before for the safety of the animals participating in its events.

Animal Justice, a Canadian animal rights group, says more than 50 horses have been killed in chuck-wagon races in the country since 1986, though it also says no one has been prosecuted for animal cruelty in those races since 1950. (Video via Calgary Stampede)

One of the drivers involved in this past week's crashes told the Calgary Herald racing can allegedly extend horses' lives, saying, "We're extending their racing career; we’re letting them do what they love to do.” (Video via Calgary Stampede)