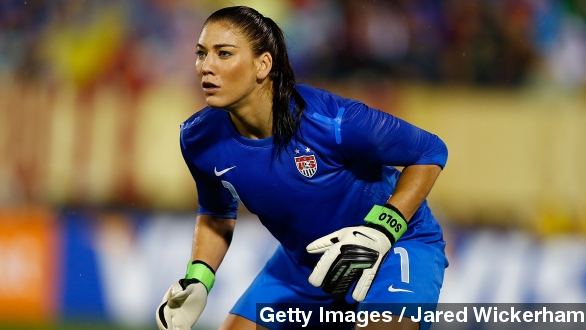 SMS
Hope Solo Suspended By U.S. Soccer For 30 Days
By Jay Strubberg
By Jay Strubberg
January 22, 2015
Solo's suspension comes days after she reportedly had an altercation with police during her husband's DUI arrest in California.
SHOW TRANSCRIPT

Solo's suspension comes days after she reportedly had an altercation with police following the DUI arrest of her husband, former NFL player Jerramy Stevens, near the team's training camp in Los Angeles early Monday.

She was in the car when it was pulled over, and multiple media outlets say the two-time Olympic gold medalist was "acting belligerent" with the police during the arrest.

TMZ says Solo tried to use their social standing to avoid punishment. One source told the outlet "they were a major pain" and thinks Solo barely avoided a disorderly conduct arrest.

U.S. Women’s National Team head coach Jill Ellis released a statement saying, in part, "Hope made a poor decision that has resulted in a negative impact on U.S. Soccer and her teammates. We feel at this time it is best for her to step away from the team." (Video via U.S. Soccer)

For her part, Solo owned up to the incident. In a Facebook post she said, "I accept and respect the Federation’s decision, and ... I apologize for disappointing my teammates."

Solo's reported altercation with police Monday wouldn't be her first run-in with the law.

The soccer star was arrested for domestic assault last summer after allegedly hitting her sister and teenage nephew. (Video via ABC)

But those charges were dismissed a little over a week ago because, according to USA Today, "the alleged victims refused to be interviewed by defense attorneys." (Video via ESPN)

The suspension keeps Solo off the field for the team's next two games in France and England. Solo will be eligible to be return once the 30 days are up but will first need approval from U.S. Soccer and the team's head coach.