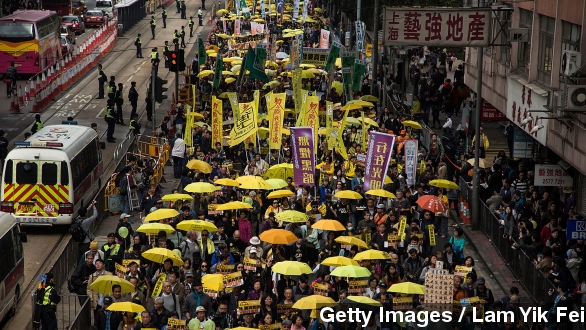 For the first time in over a month, pro-democracy protesters marched through the streets of Hong Kong Sunday to rally against Beijing's influence on the city's 2017 elections.

But the scene was much different from last year's Occupy Central movement, which featured massive crowds of protesters occupying the city center and clashing with police for months.

Sunday's assembly was much smaller in scope; protest organizers estimate 13,000 people took part in the procession, while police put the figure at 8,800.

The ultimate goal of the movement remains the same: reform Hong Kong's electoral process, which allows China to vet candidates before they can run for Chief Executive.

The New York Times called Sunday's march "a tentative test of how much support the pro-democracy groups could muster" after the Occupy movement disrupted the city for months last year.

Protest fatigue has slowed down the movement's momentum. One shopkeeper told the South China Morning Post, "Many people have become antagonistic towards protests."

But the marchers are still optimistic.

One protester told the BBC, "Their government has been very not responsive, irresponsive, to these demands. So I think, even though people are not coming out today, they are still very angry."

The march, which was approved by the city beforehand, was overseen by about 2,000 police officers.