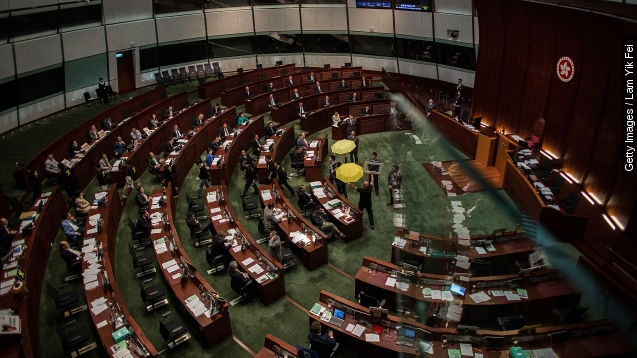 Hong Kong's pro-democracy movement is celebrating after the region's parliament voted down an electoral reform proposal supported by mainland China.

"It is a loud and clear signal to not only the SAR government but the central government that Hong Kong people object to this proposal," Labour Party lawmaker Fernando Cheung Chi-hung told the South China Morning Post.

Thanks to a botched walk-out attempt by Beijing supporters, the electoral measure only garnered eight votes in its favor; 28 of the chamber's 70 lawmakers voted against the proposal, denying the bill the two-thirds majority it needed to pass.

The legislators who voted against the bill argued the reforms were undermined by China and wouldn't have amounted to true democracy. But with the electoral reform debate deadlocked in the legislature, it's unclear where Hong Kong's pro-democracy movement goes from here.

Currently, Hong Kong's leader is selected by a committee of 1,200 people — most of them loyal to Beijing. The proposed reforms would have given the general public a vote on the next leader.

The catch was, each candidate had to be pre-screened by a Beijing-friendly committee first, effectively giving China veto power over Hong Kong's general elections. Opposition to China's oversight prompted the chaotic Umbrella Movement protests of last year. (Video via Patrick Yeung / CC BY NC ND 3.0)

But now that the proposal's been defeated, Hong Kong's leader selection process remains as undemocratic as ever. And Beijing's made it clear it isn't backing down from its demands in the face of this veto.

High-profile student activist Joshua Wong told CNN the pro-democracy movement's next deadline is 2047 — the year when Hong Kong is scheduled to fully assimilate with China. (Video via Citizen Power for China)

"The second goal for us is to fight for the right to organize a referendum to decide the future of Hong Kong after 2047," Wong said.