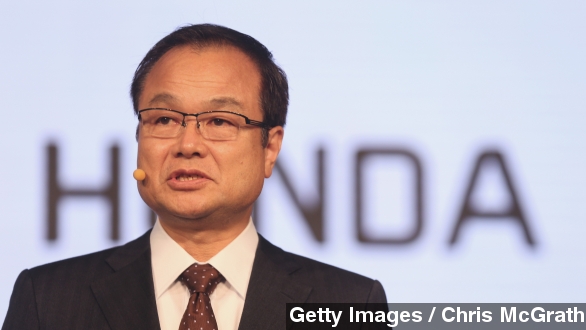 Japanese automaker Honda has chosen a new CEO to guide the auto giant out of its latest recall woes. After six years at the helm, Takanobu Ito will step down from his post as CEO and be replaced by Honda Managing Officer Takahiro Hachigo.

Hachigo, on the other hand, seems to be a much more likable figure within the company. A veteran auto analyst said of the switch, "I think this is an attempt by Honda to tread a different course, with someone who upholds harmony."

" ... one of the largest auto recalls in history," according to a CBS report about Honda's defective air bags and the recall.

Honda supplier and Japanese air bag manufacturer Takata has been responsible for more than 17 million vehicle recalls since 2008 and was linked to six deaths — all of which took place in Honda vehicles.

Honda has also had issues with its new Honda Fit, which has had five different recalls in 12 months.

Needless to say, all of of this recall trouble has made for a tough year financially for Japan's second-largest automaker. The Fit crisis led to Honda execs, including CEO Ito, taking a pay cut to help pay for the recall and to seemingly take some responsibility for the incident.

And after its third-quarter earnings fell by nearly $2 million compared to the same time last year, Honda trimmed its core annual profit forecast by more than 6 percent.

That compared to the No. 1 Japanese car maker, and the world's overall best selling automaker, Toyota, which raised its forecast for a second time in two quarters and plans to post a record operating profit of $23 billion in 2015.

Depsite stepping down, Ito will remain on Honda's board and will be an adviser to the Honda company.