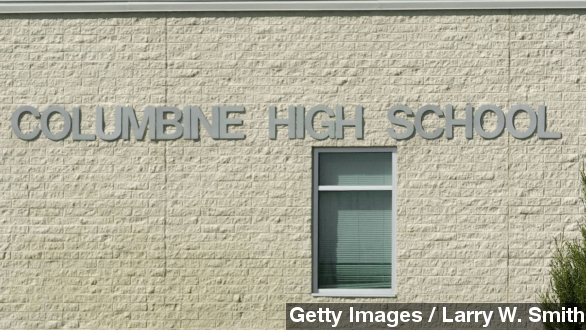 A survivor of the April 20, 1999, Columbine High School massacre lost a very special memento a decade ago — his 1999 high school football championship ring. (Video via KMGH)

But what Evan Todd lost has now been found by a homeless veteran who was looking for arrowheads in a California river. His name is Bobby Smith, and he was offered $2,000 for the ring. He told Fox News while he needed the money, he just couldn't take it.

"It wouldn't be the right thing to do. If it was my ring, I'd certainly want it back," Smith told Fox News.

"What he did was amazing," Todd said.

Todd was injured during the shooting. He lost the ring after giving speeches about Columbine in California.

Todd told TheBlaze his football team dedicated that season to a player who died during the massacre. He told the outlet: "It was quite a stepping stone to overcoming the tragedy. ... It was something that reminded me of the good things that came out of high school, the overcoming tragedy and overcoming adversity."

Sixty-year-old Smith has also had his fair share of tragedy. He's lost a wife, a daughter and his home.

To help out the veteran, Todd started a GoFundMe page for Smith, and as of Friday morning it had racked up an astonishing $100,000. The original goal was only $5,000. Fifty percent is going to Smith; the other half is going to helping other homeless vets.

"It's amazing that people would reach out to help me and other homeless vets. It shows hope," Smith said.

Smith says he didn't expect any help, but he says it's a blessing. You can watch his full interview on the "Fox & Friends" website.