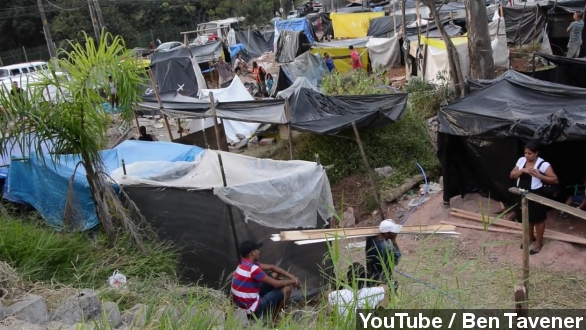 By Erik Shute
May 7, 2014
Thousands of homeless Brazilians have occupied private property outside of a World Cup stadium to protest the rising rent in Sao Paulo.
SHOW TRANSCRIPT

​Rising rent costs have displaced thousands of Brazilians in the city of Sao Paulo. Now, homeless residents are pointing fingers at the World Cup for the price increases that drove them out.

“Two-thousand families are occupying a site near the stadium that is set to host the opening match of the World Cup next month. A spokesperson for the Homeless Worker's Movement says the World Cup has motivated landlords to raise rents and they want Brazilian government to provide housing.” (Via KHON)

The families have illegally settled on acres of private property. There, they were helped by activists in Brazil’s Homeless Workers Movement, who set up tents.

The pop-up village is about two miles outside the still-under-construction Itaquerao stadium, set to host soccer’s biggest event just next month. (Via YouTube / Porta da Copa)

Residents and leaders in the Homeless Workers Movement are calling on the Sao Paulo government to provide more subsidized housing in the city, instead of world-class stadiums. (Via YouTube / Ben Tavener)

“Many are accusing the Brazilian government of spending billions of dollars on World Cup preparations and say rent is now 100 percent higher than before the stadium's construction.” (Via WFXL)

Al Jazeera has the numbers to back the complaint, saying: “While the government is spending $243 million on road works for the World Cup … there is a statewide shortage of more than 1 million dwellings — a figure that has remained steady in the past five years. An estimated $12 billion is expected to be spent around the country on hosting the tournament.” (Via Al Jazeera)

Presiding over Brazil’s largest city is Sao Paulo mayor Fernando Haddad. Several in the media say he’s been criticized for his lack of action. The Guardian reports at a summit last year, Haddad claimed the city could solve its housing crisis by 2020 by improving existing slum neighborhoods and prevent further expansion into the city's crime ridden favelas. (Via Wikimedia Commons / Agencia Brasil / Wilson Dias)

Other experts don’t buy the theory that the World Cup led to homelessness. Instead, they say a nationwide real-estate frenzy in Brazil, Latin America’s largest economy, is to blame for the price increases.