Home Printer Owners Are Wasting A Lot Of Money On Ink 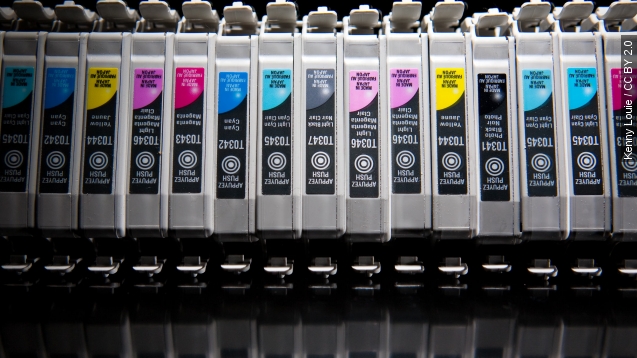 SMS
Home Printer Owners Are Wasting A Lot Of Money On Ink
By Leah Becerra
By Leah Becerra
August 5, 2015
We all know inkjet printer ink is expensive, but most people likely don't know just how much of that precious ink goes to waste.
SHOW TRANSCRIPT

Inkjet printers tend to be money pits — and unfortunately they're necessary money pits.

Whether they're being used to print coupons, term papers or resumes, most household printers aren't likely to be used very often. Especially when compared to the more expensive laser beasts running daily in office spaces around the country. (Video via Epson)

This issue is probably why Epson is rolling out a new printer and ditching conventional ink cartridges. It's called EcoTank and it's supposed to hold enough ink to print 4,000 pages. Bloomberg says, "When the well finally runs dry, customers will be able to refill it with a bottle, just like a baby." (Video via Epson)

But since this game-changing printer hasn't hit the market yet, Consumer Reports estimates most of us are still stuck paying anywhere from $13 to $75 per ounce to keep our inkjet printers fed. (Video via Canon)

"Back in 2003, PC World magazine reported that at $22 per quarter-ounce, a Hewlett-Packard color inkjet cartridge was more costly by weight than imported Russian caviar," said NPR's Robert Siegel.

And considering a lot of people don't get to use all their ink for printing — instead it's wasted during tasks like cleaning printer heads or it just dries up between jobs — we can't help but wonder why change wasn't sparked sooner. (Video via Hewlett-Packard)

But we're not here to point fingers, instead let's look at about how much money your printer is costing you.

PC Magazine reported in 2007 that light printing — measured as 80 monochrome and 20 color pages a month — cost about $82 to $195 over three years. But that doesn't take into account ink lost or the upfront cost of the printer and they only looked at five inkjets.

Consumer Reports did another estimation in 2013 that looked at two printers: an Epson and a Canon. The report found that 19 percent the Epson's $110 annual running cost went towards lost ink. And the Canon? Roughly 65 percent of the $230 annual cost was lost.

So you can see it's really hard to pinpoint exactly how much money is lost on an inkjet printer, but either way it's clear that inkjet printer owners are all losing some money.

This video includes an image from Kenny Louie / CC BY 2.0.