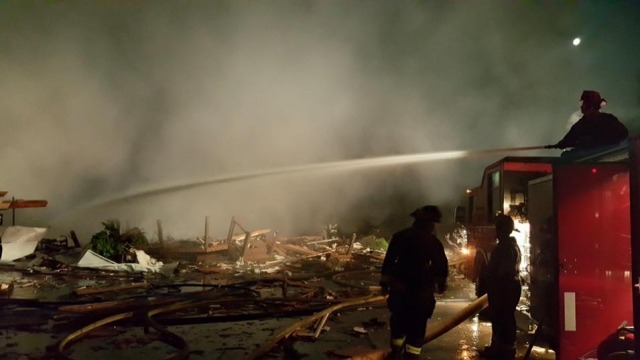 SMS
Home Explodes West Of Seattle, Blast Felt Miles Away
By Ryan Biek
By Ryan Biek
February 23, 2016
It was unclear Tuesday morning if anyone was injured in the blast or what caused the explosion.
SHOW TRANSCRIPT

A home exploded in a town west of Seattle around 4 a.m. Tuesday. It's unclear if anyone was injured.

KIRO reports the blast in the coastal town of Port Orchard leveled the building and shattered windows at an elementary school hundreds of yards away.

A reporter for the station said people miles from the site felt the explosion.

Firefighters are still searching for possible victims; the homeowners were unaccounted for as of Tuesday morning. What caused the explosion is unknown.

This video includes clips from KIRO and images from Twitter / @KitsapCoSheriff and South Kitsap Fire and Rescue.