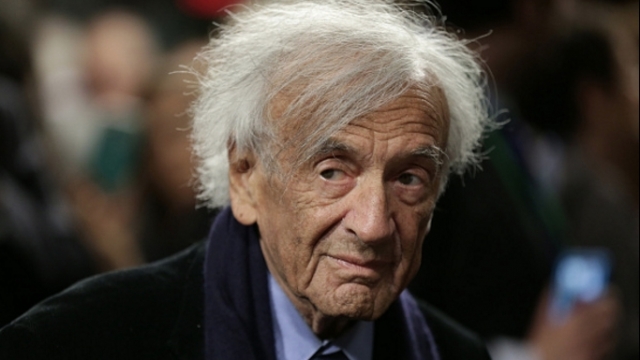 SMS
Holocaust Survivor And Author Of 'Night' Elie Wiesel Dies At Age 87
By Samantha Crook
By Samantha Crook
July 2, 2016
Wiesel said: "I believe firmly and profoundly that anyone who listens to a witness becomes a witness. ... They will continue to bear witness for us."
SHOW TRANSCRIPT

Wiesel is most well-known for his autobiography "Night" about his experience surviving the Holocaust and the atrocities of World War II concentration camps.

"For a while I thought maybe I was still prisoner of my nightmare, but then I met friends and they, too, remember," Wiesel said on "The Oprah Winfrey Show."

Wiesel won the Nobel Peace Prize in 1986. The Norweigen Nobel Committee said at the time: "Elie Wiesel has emerged as one of the most important spiritual leaders and guides in an age when violence, repression and racism continue to characterize the world."

The committee went on to say: "Wiesel is a messenger to mankind; his message is one of peace, atonement and human dignity. His belief that the forces fighting evil in the world can be victorious is a hard-won belief. His message is based on his own personal experience of total humiliation and of the utter contempt for humanity shown in Hitler's death camps."

"Nobody would have imagined that such a crime could be conceived and implemented in the human mind. That is why, by the way, some people didn't believe it even though it happened in their lifetime, even while it happened," Wiesel said in a United States Holocaust Memorial Museum video.

"I believe firmly and profoundly that anyone who listens to a witness becomes a witness. So those who hear us, those who read us, those who learn something from us, they will continue to bear witness for us. Until now, they're doing it with us. At a certain point in time, they will do it for all of us," Wiesel said in the video.